Wings of the Phoenix Slot 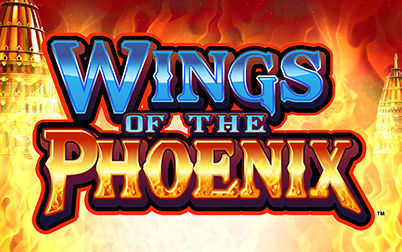 A Fiery Slot with Stacked Symbols, a Mystery Feature and Free Spins

The phoenix comes from Greek mythology and is said to be a bird that has the ability to regenerate. The rises from the flames of its previous incarnation and each of these incarnations can last for hundreds of years. The phoenix in this game has a steely stare which gives the creature a chilling, slightly unnerving look. Joining the mythical bird are a series of fire themed symbols including a flame haired female, crystals and golden contraptions.

The game features stacked symbols throughout, which are only added to be the ‘mystery feature’. Land a combination of scatters and you’ll enter the free spins bonus round, where those mystery wins become more frequent.

The Base Game with Added Stacks

Wings of the Phoenix is a five-reel slot featuring a total of 30 win-lines. The cost of each spin is 45 credits – 30 credits covering the win-lines and 15 credits paying for the added features. Each spin sees the ‘Action Stacked Symbols’ format in play. This is shared between most Konami slots. It gives you a chance to cover a lot of the spaces on the reels with the same symbol.

The highest paying standard symbol is the beautiful flame-haired lady. Hit the lady five times in a row and she’ll pay you 250 coins. A bunch of bright, purple crystals and a flaming brazier each pay 125 coins. Two strange flame emitting contraptions each pay 100 coins as a top prize.

The highest paying symbol in the entire slot is the steely-eyed phoenix, which is a wild. This golden symbol pays a top prize of 1,000 coins if hitting five in a row. This wild will substitute for any other symbol in the game apart from the scatter.

The ‘Action Stacked Symbols’ can receive a huge boost with the addition of a mystery feature. This feature can appear at any time, during or after any reel spin. The feature will see all the playing card characters transform into one of the higher paying symbols (chosen at random). This will see that one symbol take over much of the reels and will almost guarantee the occasional huge win. Effectively half of the reels will now contain this symbol, with the dream scenario seeing the Action Stacked Symbol being the same symbol.

An emerald gem held in an intricate gold frame acts as the scatter symbol. Land 3, 4 or 5 of these scatters anywhere on the reels and you’ll win 8, 15 or 30 free spins respectively. Land three or more scatters during these spins and you’ll add the same 8, 15 or 30 spins to your existing total.

Unusually, you won’t find any added bonuses in the free spins, such as a multiplier or extra wilds. However, what you will find is that the mystery feature occurs more frequently. This can make the feature a highly profitable one – especially if you can land the 15 or 30 spins initially.

Fire and Fury: Wings of the Phoenix Design

Wings of the Phoenix has a magical, mysterious look. The backdrop to the reels shows a crystalized purple design, the same crystals appearing on the reels. While the range of symbols are a strange mix. You have ancient symbols such as the phoenix, joined by contraptions that look like they’ve been made by mad inventors in the industrial era. This gives the slot a good, original feel, while the air of mystery adds to the intriguing feel. The flame haired lady has green markings all over her face too. Why? We’ll never know! The phoenix itself features impressive animation when you win. The accompanying sound, while not reflecting the theme, is functional but effective.

Will Wings of the Phoenix Help Your Bankroll Rise Again?

This Konami design slot features both an unusual theme and unique gameplay. While the action stacked symbols are popular amongst the Konami range, the mystery feature only plays out here and gives the game an original quality. The free spins, where the mystery feature ensures excitement, is a bonus round you’ll certainly want to land. Wings of the Phoenix is a recommended game – just don’t get too close to those flames!