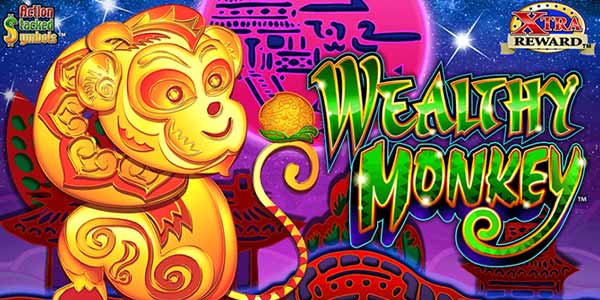 The monkey has played a significant role in Chinese culture for the last two thousand years, so it’s no surprise to see a slot based around the lovable creature. This game features artistic and colourful depictions of the monkey, as well as other creatures including bull, a bat and a fish.

Throughout the base game you’ll find stacked symbols, giving added opportunity of landing those juicy multi-line wins. This remains in the free spins feature, where added multipliers are thrown into the mix. Land a 5x multiplier in one of those big wins and you’ll be a very wealthy monkey indeed.

Wealthy Monkey, like most online slots today, plays out on a 5×3 reel setup. The cost of each spin is 45 credits, 30 credits covering each of the win lines, with the additional 15 credits for the features.

The highest paying standard symbol in the game is the orange and blue bull, which pays 300 coins if you can land five in a row. A flying, green and gold bat and a blue and gold fish each offer a top win amount of 125 coins. A purple ornament and a blue flower pay a t op prize of 100 coins.

The cheeky-looking monkey with a ball for a body acts as the wild symbol. The wild only appears on reels 2, 3, 4 and 5 and will substitute for every other symbol apart from the scatter. The wild can work well with the stacked symbols in play, enabling more multi-line wins. The monkey also plays a very important role during the free spins bonus round.

Throughout the game you’ll find the ‘Action Stacked Symbols’ in play. Each reel contains a number of adjacent (or stacked) symbols that are randomly replaced with any of the symbols in the game (apart from the wild and the scatter).

This randomly chosen symbol is the same across all five reels changing each spin. This means one symbol can dominate the reels. This opens the chance to win across many of the 30 win-lines.

Multipliers Work Together in the Bonus Game

An orange coloured fruit (possibly a Jiro Kaki) with a green leaf featuring Chinese inscription acts as the scatter symbol in the game. Land 2, 3, 4 or 5 scatters across any of the reels and you’ll win 1x, 3x, 15x or 50x your stake respectively. 3, 4 or 5 scatters will also see you awarded with 7, 15 or 30 free games too.

You’ll notice during the free games that multipliers can be added to the wilds. These multipliers can be 2x, 3x or 5x and will give an instant boost to your pay-outs. If more than one wild with a multiplier appears on a reel, then all other wilds on that reel will also upgrade to the same level too.

The free spins can be retriggered. Land 3 or more scatters again and you’ll see a further 7, 15 or 30 spins added to your total. However, land just a couple of scatters and you’ll be awarded a further 2 spins.

Wealthy Monkey has a very different design to the majority of other creature based slots. Yes, you’ll find a number of animals on the reels, but these are all painted, with a colourful and slightly surreal design. With shades of bright oranges, blues, reds and green, the symbols stand out and are very impressive, especially with the added animation. The backdrop to the slot is equally impressive too, with purple waves depicting the sea. The accompanying soundtrack is basic but effective.

Will You Go Ape for the Wealthy Monkey Slot?

There are some games that simply must be played for the unique visuals and this Konami designed slot falls into this category. The colourful and original design makes for a game with a difference – even though the game-play is strikingly similar to other Konami titles. However, this isn’t the only reason to enjoy Wealthy Monkey. With stacked symbols in play throughout there is excitement on every spin. The added multipliers in the feature then only move these excitement levels up a notch. Put it altogether and this is one monkey themed slot worth a shot!