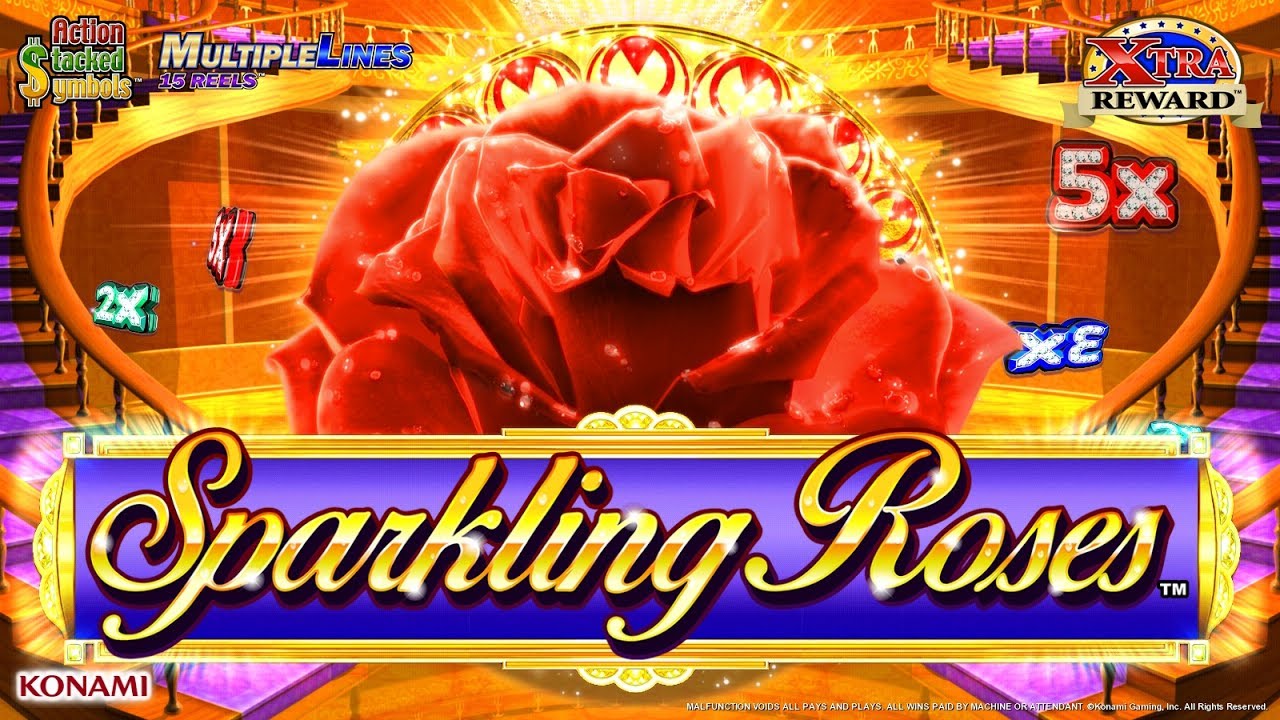 Multipliers Can Boost Any Win in this Bright Casino Slot

Many slots from Konami are bright, though few match the vivid colours of the Sparkling Roses slot machine. The theme is distinctly feminine. You’ll see an old style ‘puffer’ perfume spray, a lady with hair fixed up for a high-society ball – and detailed red roses on the reels. There is also an element of bling. Random win multipliers appear, made out of diamonds. Add to this a colourful background, and some stirring classical music sound effects – and you have a slot which is Konami through and through.

Those multipliers are the main attraction of the game play. These appear in both the base game and the free spins. Unusually, only one of the higher paying symbols can appear on any one spin. This can sometimes lead to covering a lot of the reels with the same symbol.

Polish Up Your Knowledge of Sparkling Roses Before You Spin

The nuts and bolts of this slot are as follows; you get a regular 5 by 3 grid for the reels, which has a fixed number of 40 win-lines crossing over it. The smallest spin amount is 40c, though you can go much higher than this by adding multipliers.

When you hit the spin button, there is an unusual look to the reels. Instead of a smooth spinning animation, lines appear across the reels lengthways. This is because only one of the 4 higher paying symbols appears. What happens is that the reels flicker, while the decision on which of those symbols is used for this spin is made at random.

Best of all is the recipient of the roses – a head picture of a blonde lady, which curly hair. I am not sure if she is looking pleased to receive a rose, or checking herself in the mirror before heading out! Like all the bigger paying symbols, these are stacked on the reels. It is possible to cover the entire grid (though obviously rare).

Next comes a green purse full of green gems, a perfume puffer and an elaborate purple and gold key with a heart shaped fob. Playing card symbols also appear, these are mixed like regular symbols and not restricted to one on the reels at a time.

At any time, a multiplier can appear on top of a symbol. These range from 2x to 5x, and take the form of diamond studded jewels. They will not always be in positions where they complete wins. Where they are on line hits, that entire prize is multiplied by the amount shown.

Best of all, these multipliers work together. For example, if you get a 5x and a 2x on the same line win, then the entire prize is multiplied by 10. The biggest wins will come when you combine good coverage of the reels, using the stacked symbols, with several multipliers.

The potential here is big, you can win up to 144x of any prize with these random multipliers.

Roses are bigger than the other symbols, and are drawn in striking detail. These have scatter prizes, though their main role is to trigger the free spins game. The number of spins is low compared to some games. You get 5, 8 and 15 for 3, 4 and 5 roses respectively.

What the spins lack in number, they make up for in big win potential. During your spins, the win multipliers appear every time and not just at random. You can retrigger too, with 3+ roses anywhere in view.

In terms of bright colours, it would fair to say the slot machine Sparking Roses stands out on the casino floor. It is rare to see so many colours together – only the fact that a single high paying symbol appears each time stops those colours clashing horribly!

As you would expect from Konami, the animations are smooth, and the artwork is high quality. I like the mystery of the blonde lady. Her look could mean anything at all! You get some interesting sound effects, including a rendition of the William Tell Overture when you hit a big win to go with a coin fountain and fireworks display.

Will This Slot Come Out Smelling of Roses?

Having random multipliers works well for me. You just never know when a win will be 10x or more the regular prize. Only one high paying symbol at a time is unusual. This does mean you’ll get some good coverage of the reels at times. If you can combine this with those multipliers, then a big win could be coming your way.