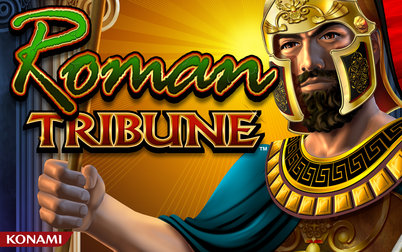 There was a time when the Roman Empire practically ruled Europe, capturing large swathes of the continent under their powerful rule. The Roman Tribune Konami designed slot harks back to those days, featuring a Roman Soldier as the all-important wild on the reels. Joining him are a female companion and a bunch of artefacts from the time including gold coins, armour and jewellery.

Roman Tribune slot machines feature stacked symbols on all five reels, offering those large multi win-line pay outs. The highlight of the slot is the free spins bonus round where a handy multiplier is added, although you can choose an instant credit pay out instead of playing the free spins.

Action Stacked Symbols and the Base Game

Roman Tribune plays out on the very popular 5×3 reel configuration. The game features a total of 30 win-lines and each spin costs the same 30 credits. The female companion is the highest paying symbol in the base game, worth 1,000 coins if landing five in a row. This symbol is also the only one in the game which pays for landing 2 or more in a row (subsequent symbols require you to hit at least 3 in a row).

Next on the pay table is a blue pendant on a gold chain. Land five pendants in a row and you’ll pocket 500 coins. A Roman helmet with red and white plumage above has a top prize of 250 coins, which is matched by a shield and a dagger. At the lower end of the pay table you’ll find the playing cards 9, 10, J, Q, K and A, whose top wins range from 100 through to 150 coins.

Each spin sees the ‘Action Stacked Symbols’ format come into play. This system is shared by many Konami slots. Each time you spin, a symbol assigned at random becomes stacked on the reels. This can cover entire reels, and often more than one of them.

The Roman Soldier acts as the wild symbol in this game. This important symbol appears on reels 2, 3, 4 and 5 only and will substitute for any other symbol apart from the scatter. This wild can work well with the Action Stacked Symbols, ensuring further large wins. Ideally, wilds will join together those strips of one symbol, triggering many of the 30 win-lines in a single spin.

Free Spins, Multipliers and the Balance of Fortune Option

During your free spins any win amount is double the amount that you would receive in the base game. The free spins can be retriggered too, with further 8, 10 or 15 free spins added to your existing total if you land the appropriate scatters.

In an interesting twist, there is also a ‘Balance of Fortune’ option. Instead of collecting the ‘free games’ players may opt for ‘credit prize’ instead. This gives you an instant win instead of the free spins. On average, the random win amount is greater the more free spins that are exchanged.

This Konami designed slot is framed by large blue pillars on either side of the reels. Standing guard at the bottom of the pillars are pairs of Roman soldiers, keeping the Empire safe. The reels are backed by a plain light blue / grey colour and feature two animated symbols in the wild and the scatter. While these are impressive, the rest of the symbols can look a little outdated. The accompanying sound is functional and generic – perhaps an epic Rome inspired theme would have been more effective.

There is a lot to like about the Roman Tribune slot. The Action Stacked symbols throughout the game ensure added excitement at every spin, with big wins only ever a spin away. The free games feature is a winner due to the 2x multiplier in place for every win. If you’re stuck for time or want that instant buzz, take advantage of the ‘Balance of Fortune’ option too. While the sound and visuals aren’t going to blow you away, this game is certainly worth a play for anyone who enjoys historical themed slot games.