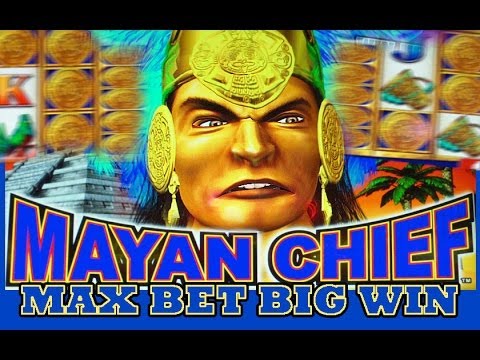 Mayan themed games are always very popular when it comes to slot gaming and this Konami game is another to add to the list. On the reels players will find a mix of Mayan treasures and the revered creatures from the Kingdom. The golden Mayan setting is particularly appealing, with the ability to transport you away from the casino floor to the legendary South American location.

With Action Stacked Symbols throughout the Mayan Chief slot machine, the action comes thick and fast. However, it’s the amazing free spins features which really stand, with potentially 15 spins to be won on EVERY win line.

Mayan Chief slot plays out on the very popular 5×3 reel configuration, with 30 win-lines that pay from left to right. The higher paying symbols on the pay table begin with the Mayan treasures. The treasure chest symbol, overflowing with golden trinkets including a traditional Mayan symbol, is the most eye catching. A golden cup, complete with blue gems (sapphires) will also appeal. You’ll also find two contrasting animals featuring. There’s a leopard, who looks a little on the mean side and a bird of prey, complete with blue and green plumage.

At the lower end of the pay table you’ll find the playing card symbols 9, 10, J, Q, K and A completing the reels.

Throughout the base game (and the feature too) you’ll find the ‘Action Stacked Symbols’ format in play. This sees a number of adjacent symbols on all five reels covered with an ancient, blue tile. When the reels stop, this tile will be removed, and all revealed symbols will be the same random symbol from the game. This random symbol can be any in the game apart from the wild.

That wild symbol is represented by the Mayan Chief. This Chief is a stern looking character who wears a golden headdress, with large gold discs on either side of his head. This wild will substitute for any other symbol in the game apart from the scatter.

The bonus symbol shows a golden Mayan calendar complete with an image of the sun in the centre. Land 3, 4 or 5 of these bonus symbols in a row on a win line and you’ll enter the free spins. Fifteen free spins are yours when you land the maximum five in a row. When you consider that you can win 15 free spins on every line, you could in theory land an incredible 450 free spins.

At first, landing 450 spins might seem unlikely. However, with the scatter being one of the Action Stacked Symbols, this is more likely than you might think.

The other good news is the fact that the re-spins can be retriggered. Some amazing numbers have been racked up at the game, with free spins features of more than 700 spins being recorded.

The only downside to this many spins is the amount of time they can take (a nice problem to have!). However, you can opt to take the ‘Balance of Fortune’ feature, where you’ll be paid a random amount for your spins. You’ll be given a lower and upper limit and your win will be somewhere between the two. This option is available both at the start and during the free spins.

In the Light of the Sun – Mayan Chief Design

The free slot machine Mayan Chief is set against the backdrop of a Mayan setting, with a large pyramid temple in the middle of the screen. Palm trees stand either side of the reels, while the sun comes streaming through the scene. Land the feature and the scene changes to night-time, with the glow of the moon lighting the temple blue.

The reels themselves don’t quite match up to the backing, as they have a plain white background. The symbols have a basic design too, which can give the game a dated look. However, the tiled stacked symbols do add a more modern sheen to the design.

Wrap Up: Should You Do Battle with the Mayan Chief?

Mayan Chief is one of those slots where the focus is very much on the feature. While the base game is entertaining due to the Action Stacked Symbols, it’s the feature that sets the game apart. The opportunity to win literally hundreds of spins is not one you’ll find often, but here you have every chance. Retriggers only enhance the feature. For this reason alone, Mayan Chief is worth a spin.