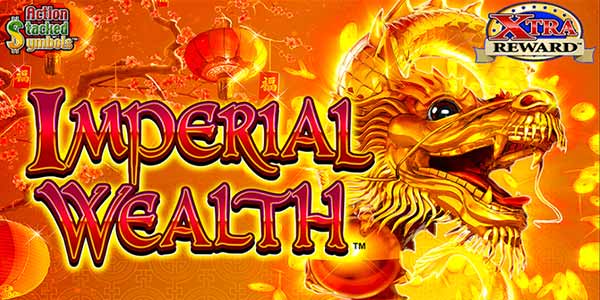 A Far Eastern Themed Slot Where Nudges Can Be Gold

Imperial Wealth is a slot which transports you to the Far East, another addition to the very popular genre. This game features symbols such as flying fish, fortune cookies, bags of gold coins and elaborate golden patterns. The stand out symbol is the oversized golden dragon which can fill an entire reel, a symbol which is also the highest paying.

Lucky frames play a key role in the game, where all the symbols contained within the frame become the same. Watch out for when the reels nudge up or down to give you a great winning opportunity. The free spins feature where those big win opportunities are given a further boost.

This Konami designed slot features five reels and a total of 30 win-lines, while each spin comes at the cost of 30 credits. This slot features the very popular ‘Action Stacked Symbols’. A number of adjacent positions on each of the reels are assigned to a single randomly selected symbol. This system ensures that one symbol can dominate the reels, making those large multi win-line pay outs possible.

The golden fortune cookie is the highest paying standard symbol on the reels, worth 250 coins for landing five in a row. A pair of leaping gold salmon is next on the pay table and pays 200 coins. An elaborate design framed by lotus flowers and a bag of cold coins each have a top pay out of 150 coins. At the lower end of the pay table you’ll find the playing card symbols 9, 10, J, Q, K and A.

The wild symbol is a stacked golden dragon which can fill an entire reel. This wild will substitute for any other symbol in the game apart from the scatter. This wild is also the highest paying in the game, worth 500 coins for the maximum five in a row.

Each of the ‘Action Stacked Symbols’ has a golden frame. If you manage to land golden frames anywhere on at least three of the reels, you’ll enter the Lucky Frame Feature. Now the Action Stacked Symbols within the frames can be any of the symbols in the game INCLUDING the wild and the scatter. Any reels which contain a ‘lucky frame’ will now nudge up or down to ensure the lucky frame (and the same symbol) now fills the entire reel. Any reels which contain a wild symbol in the slots machine Imperial Wealth will also nudge so that the wild symbol fills the entire reel too.

The scatter symbol is unusual in that it only appears during the Lucky Frames Feature. This can be selected as one of the Action Stacked symbols and will activate the free spins when it appears on three or more reels. The minimum three scatters will see you awarded eight free spins, while four scatters are worth 18 spins. Land the maximum five scatters and you’ll win an incredible 88 free spins.

The Imperial Wealth slot machine is set against the backdrop of a glowing orange sky. Look up and you’ll see Chinese lanterns spread across the sky through the branches of autumnal trees. The reels have a purple backing, while the range of colours including much gold make for a striking game. The dragon is easily the most eye-catching of all the symbols, fantastically designed and filling entire reels. The overall mix of symbols makes for an enchanting game and does a fine job of creating the atmosphere of the Far East.

Will the Imperial Wealth Slot Bring You a Golden Dragon’s Hoard?

With Asian themed games being so popular at online casinos, it can be tough for individual games to stand out. Fortunately, there is enough variety and originality in this game to stand out. The combination of the Action Stacked Symbols and the Lucky Frames can make for a high action base game. Line up those matching symbols during the Lucky Frames feature and you’ll be looking at one of those large oversized wins. Throw in a free spins feature (with an incredible 88 free spins up for grabs) and you have a game well worth a spin.