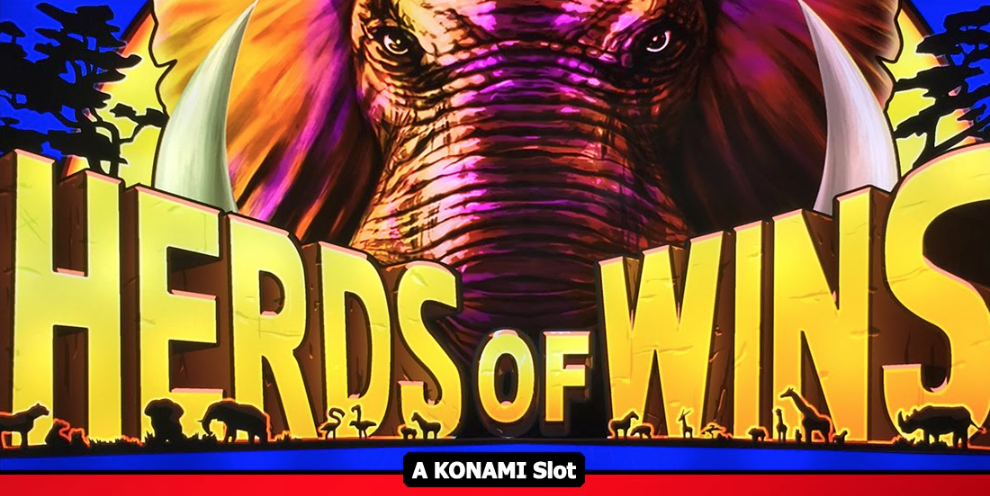 Herd of Wins slot machine is an African themed slot where you’ll encounter a mix of animals, including tigers, zebras and elephants. The game has stacked symbols throughout, with impressive regular re-spins where the slot moves into a 3D mode. All of this takes place on the impressive backdrop of the African Savannah.

The highlight of the game is the free spins feature. If the planets align you could win an amazing 40 free spins. The action comes thick and fast in the feature, as those re-spins are much more likely. This is one of several Africa themed slots from Konami. Others include Grand Power of Africa, and African Diamond.

Herds of Wins is a five-reel slot from Konami featuring a total of 30 win-lines. This game, like many of the Konami range features ‘Action Stacked Symbols’. A number of adjacent (or stacked) symbols on each of the five reels will feature the same random symbol during each spin. This randomly chosen symbol can be any from the game, including both the wild and the scatter.

These stacked symbols are easily identifiable as they are backed by a yellow frame when they appear on the reels.

During the base game re-spins are a regular feature. These occur when the ‘Action Stacked Symbols’ fill at least two of the reels completely. This will now see all of the filled reels move to the left and another random symbol will be chosen to fill all the spots. This big chunk of the same symbol filling the left-hand side can now win big.

The remaining reels will now re-spin. This is made more interesting as these reels will now move into a 3D view as they spin. You’ll now be hoping for matching symbols to those on the left-hand side to fill the reels, ensuring some huge wins.

Animal Symbols Have the Biggest Prizes

The highest paying symbols in the game are the four animals on the reels – the tiger, the elephant, the zebra and the rhino. You’ll certainly be wanting one of these four to be chosen as the Action Stacked symbols, as this is where your larger wins will come from. At the lower end of the pay table you’ll find the playing card symbols 9, 10, J, Q, K and A.

The wild symbol is represented by a large sparkling diamond. This will substitute for any other symbol in the game apart from the scatter.

The scatter symbol in the slot machine Herd of Wins shows a golden map of Africa. Unusually, you’ll need at least six scatters to enter the feature. However, this can be easily achieved when the scatter symbol is chosen as the Action Stacked Symbol. Land the minimum six scatters and you’ll be awarded 10 free games. However, this increases with each added scatter. At the top end, if you manage to land 13, 14 or 15 scatters you’ll win an incredible 25, 30 or 40 free spins.

These are no normal free spins either, as the re-spins are that much easier to achieve. This is because reel one will always be filled with an ‘Action Stacked Symbol’. This means you’ll only need to fill one of the other four reels to gain that re-spin. In practise, you might see yourself gaining a re-spin every 2 to 4 spins.

During the base game of this Konami designed slot you’ll see a view of the African plain during the day. The sky is blue, and the terrain is a nice mixture of sand and grass, while rocks and trees also feature. Land the feature and the scene changes to dusk, with an appealing orange glow over the scene. Each of the symbols has a transparent backing, ensuring the eye-catching view is seen as widely as possibly.

Graphically, the game is excellent, especially when it cuts to the 3D view. The accompanying sound is equally good, with a nice mix of themed African drum sounds and more generic jingles.

Will You Hear the Big Win Jingle While Playing Herd of Wins?

Herd of Wins is an excellent slot from start to finish. At first glance, you might think you are playing a standard 5×3 slot, but you’ll get rid of this notion quickly. With stacked symbols and re-spins, you’re only ever a spin away from one of those huge multi win-line pay outs. Check out the three-dimensional reels too! Land the feature and you’re almost guaranteed to walk away with a nice pay packet.