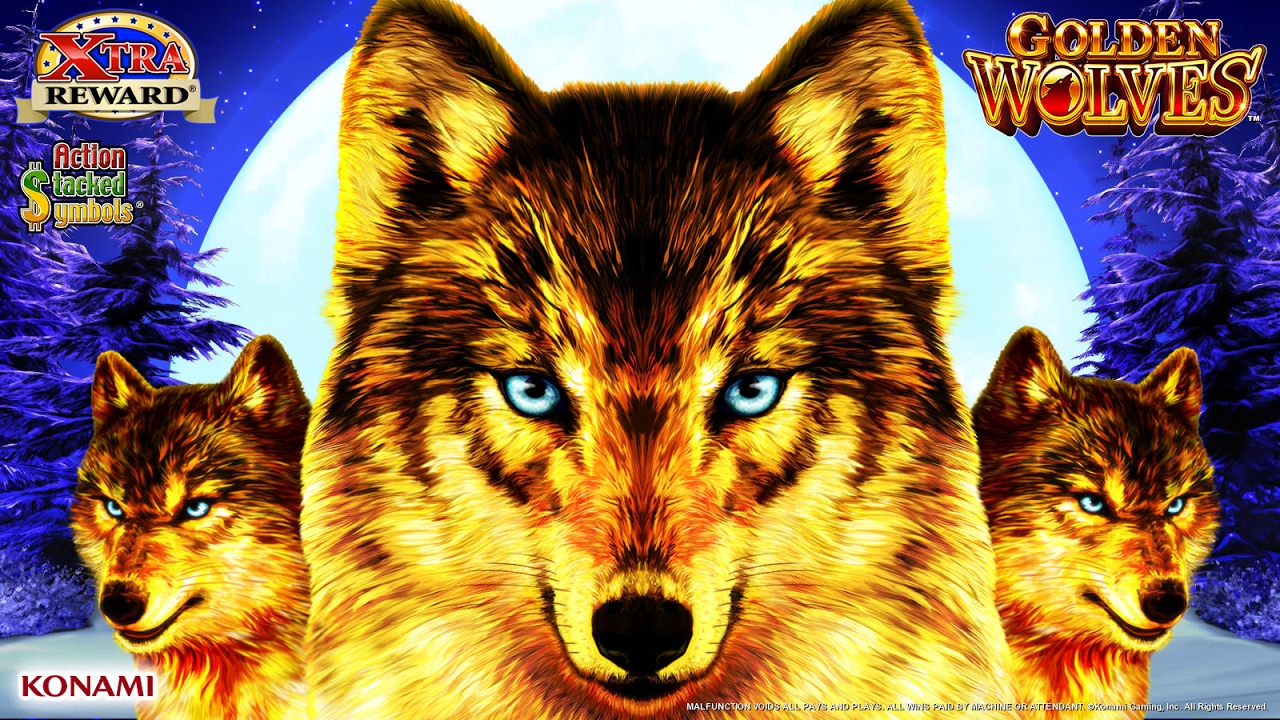 A Prairie Based Game Featuring a Pack of Wild Wolves

This Konami designed slot takes you out to the North American plain, where you’ll find a whole host of wildlife frequenting the land. On the reels there are buffalo, stags, rams, raccoons and soaring eagles, but only one symbol is the boss here – the wolf. This creature stares out from the reels with piercing blue eyes and is the most important symbol in the game.

The Golden Wolves slot game features stacked symbols on all the reels, while added wilds can occur randomly at any time, making for some huge spins. The key feature is a free spins bonus round, where any spin can receive an added boost.

Golden Wolves is a five-reel slot with a set total of 30 win-lines. Each spin uses the ‘Action Stacked Symbols’ system, which is popular on many Konami slots. Each reel contains a number of adjacent (or stacked) symbols which will be replaced by a random symbol during every spin. This random symbol can be any in the game apart from the wild or the scatter. The chosen symbol can dominate the reels, ensuring large pay-outs at times across many of the win lines.

The fearsome looking buffalo is the highest paying in the game and is worth 500 coins for hitting five in a row. Being the highest paying, this is the symbol you’ll want selected as the ‘Action Stacked Symbol’ the most. Next on the pay table is the stag, which displays a magnificent set of horns. Land these five times in a row on a win line and you’ll pocket 200 coins. The ram, with its curled horns, pays 200 coins. Both the soaring eagle and the raccoon have the same 150-coin pay-out.

Playing card symbols make up the lower end of the pay table. An Ace and a King each have a top prize of 30 coins, while the subsequent Queen, Jack, Ten and Nine each offer a top win of 20 coins.

The wolves act as the wild symbols. These creatures with a golden glow will substitute for any other symbol in the game apart from the scatter. With the ‘Action Stacked Symbols’ format in play, a single wild can work together with the series of randomly chosen symbols to create that huge win.

However, that is not the end of the story for the wild wolves. You’ll randomly find that some spins will see a wolf howling up at the moonlight, only to see a series of wolves appear. These wolves will all now run on to the reels and take their place while the reels are still spinning. With up to 6 or 7 additional wilds, you can expect some huge wins with these added bonuses.

You have an extra bonus in the free spins, as the randomly awarded wild wolves become more frequent. This adds a level of excitement to every free spin and can make for a highly profitable feature.

The free play Golden Wolves slots machine is set at night, with the glow of the moon lighting up the prairie scene. The prairie has that delightful rock and sand texture, while in the distance mountains loom large. The reels have a dark blue colouring, while the mix of creatures and playing cards on the reels add much colour.

Each of the creatures is nicely designed, although added animation might have been a great way to bring each to life. The wild wolf symbol does look impressive however, with the added golden glow. The accompanying soundtrack is a basic but effective whirring and clicking of the reels.

Shooting for the Moon with the Golden Wolves Slot Game

This Konami designed slot will appeal to those who like those unexpected big wins. The base game, with the ‘Action Stacked Symbols’ can make for big wins at any time. However, it’s when the wild wolves appear under the light of the full moon that the really big wins happen. These randomly awarded wilds can almost ensure those ‘big’ or ‘super big’ pay outs, and they become even more frequent during the feature.