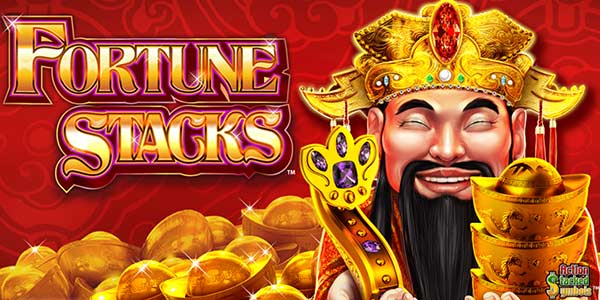 Games with an Asian theme are all the rage at online casinos and the Fortune Stacks slots machine is another to add to the list. The game features a range of symbols from the region, including a China kitty, a golden pig, a cross between a dragon and a tortoise, a small bonsai tree covered in gold coins and a bag of money. The bearded emperor resides over it all, acting as the wild symbol.

The game utilises the ‘Action Stacked Symbols’ system, where one symbol is chosen at random to fill much of the reels. This system goes one step further in the feature, with added multipliers on a number of the stacked symbols too.

The Base Game and the Action Stacked Symbols

This Konami designed game has five reels and a total of 30 win-lines. On each reel there are a number of designated stacked symbols, which are randomly replaced by a random symbol from the game.

This ‘Action Stacked Symbols’ format means that the same symbol can be very prominent on some spins, filling much of the reels. This can lead to some large, oversize wins where a number of the 30 lines all pay out together. The only symbols not included as ‘Action Stacked’ are the scatter symbol and the wild.

The highest paying symbol in Fortune Stacks slot is the smiling China Kitty, which pays 300 coins when hitting five in a row. The dragon/tortoise and the golden pig are next on the pay table, each worth 150 coins for hitting the maximum five. The gold covered bonsai tree and the bag of gold each pay 100 coins.

At the lower end of the pay table you’ll find the playing cards 9, 10, J, Q, K and A. These six symbols have top prizes ranging from 80 through to 60 coins.

The emperor, complete with a large brown beard and a golden crown, acts as the wild symbol. This wild appears on reels 2, 3, 4 and 5 only and will substitute for any other symbol apart from the scatter. With the ‘Action Stacked Symbols’ on the reels, a single wild can enable a number of wins, making this symbol more important than usual.

Up to 5x Multipliers in the Bonus Feature

A fortune cookie acts as the scatter symbol. Land 3, 4 or 5 scatters across any of the reels and you’ll win 5x, 15x or 100x your stake, as well as gain entry into the free spins feature.

The free spins play slightly differently to the base game. On one or two of the reels, any of the ‘Action Stacked Symbols’ will have a multiplier of 2x, 3x or 5x, symbols on the same reel having the same multiplier. These stacked symbols can pay high anyway, but with these multipliers attached, some mega wins are more than possible.

The game is played against an eye-catching dark red backdrop. Trails of patterns and golden stars light up the background, giving the game an enchanting look. Many of the symbols are filled with gold, which does a fine job of illuminating the reels. Check out the impressive animation when the wild and the scatter symbols spring into action too. All the while, the game is filled with a soundtrack which will transport you nicely to the Far East.

Spinning Your Way to a Fortune?

Fortune Stacks is a slot where the wins can really stack up! The ‘Action Stacked Symbols’ in the base game ensures that you’re only ever a spin away from that big multi-line win. Enter the feature and those multipliers can make for an incredible bonus round. Add in the magical look to the game and the Far Eastern theme and there is nothing not to like about this slot.