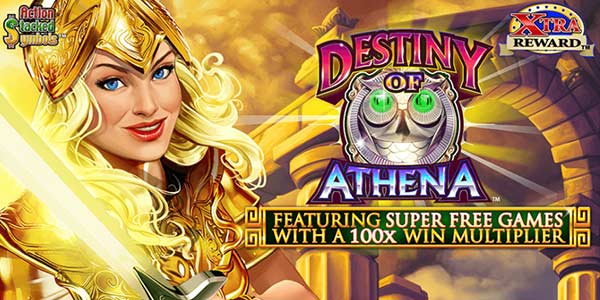 The story of Athena is a very interesting one. Her father, Zeus, was suffering from a terrible headache and then Athena sprung from his forehead fully grown and in armour – guess this makes a change from the usual child birth scenario. Athena appears on the reels of this Konami designed slot with long, flowing blonde hair and incredible blue eyes.

The highlight of the slot machine Destiny of Athena is the feature. You’ll pick and land one of two bonus games – pick the right one and you could find yourself looking at an astounding 100x multiplier.

Action Stacked Symbols: The Destiny of Athena Base Game

Destiny of Athena uses the ‘Action Stacked Symbols’ system, popular at a number of Konami designed games. Every reel contains a number of stacked symbols which will be replaced by a random symbol (any symbol apart from the wild). With this symbol now being stacked on all five reels, the possibility is there for a big win across many of the thirty win-lines. The scatter symbol can be stacked too, making the feature a little easier to land.

The beautiful Athena herself is the highest paying symbol in the game, worth 125 coins for five in a row. Next on the pay table is Athena’s mighty sword, wrapped in a red bow, offering a top prize of 75 coins. Athena’s silver shield is next and pays 75 coins. A hunting horn and an eloquent gold snake destined bracelet each have a top win amount of 50 coins.

Completing the standard symbols are the playing cards 9, 10, J, Q, K and A. The top pay outs for each of these symbols range between 25 and 15 coins.

The symbol showing the word ‘wild’ appears on reels 2, 3, 4 and 5 and will substitute for any other symbol apart from the scatter. This wild, despite not being one of the ‘Action Stacked Symbols’ can appear stacked on the reels too.

The final symbol in free Destiny of Athena slots is the scatter which shows the image of an electronic looking owl, with glowing green eyes. This scatter only appears on reels 2, 3 and 4. Unusually, this scatter acts as a wild alongside the other wild symbol, the two working in combination at times to land those big wins.

However, more importantly perhaps, the scatter symbol also activates the free games feature. This occurs when the owl appears on reels 2, 3 and 4 during the same spin. You’ll now choose on of the three owl symbols which will reveal one of the two following features:

It’s clear which of the two features you want to play, and you have a 1 in 3 chance of landing it (two owls offer the free games option, while the other takes you to the super free spins).

This Konami design certainly looks impressive. The backdrop shows a stone, wooden arch, which looks stately during the base game, while the scene becomes fiery during the feature. The mostly purple backed reels show an array of well-designed symbols, with Athena and the mechanical owl the two standout symbols. Check out the animation when the owl flaps its wings too. A resounding, almost movie-like soundtrack meets each spin, with the chirping of the owl heard in the distance.

Destiny of Athena slots machine is one of those games you have to play at least once. It’s not often that you find a slot with a range of multipliers that include 100x. Time it right and you could be looking at a win in the jackpot class. Even the ‘standard’ free spins feature is impressive, where the opportunity of 20x win is never one to be sniffed at. The sound and graphics hit the spot too, while Athena will certainly turn the heads of many when playing. The ‘Action Stacked Symbols’ in play throughout the base game keep the interest levels high at all times too.