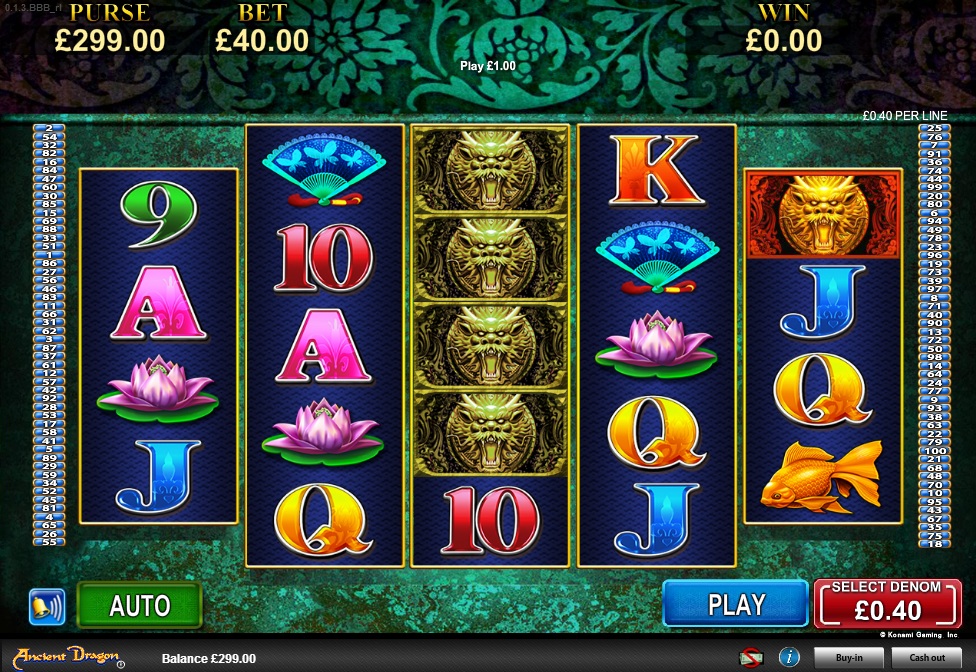 Games with a Far Eastern themes are very popular at online casinos and Ancient Dragon is another fine slot to add to the list. This Konami designed game features two dragon symbols on the reels – one a stone mounting of a dragon’s head, the other showing the same symbol now alive and breathing fire. Joining the dragons are other sacred Eastern creatures such as a tortoise and a goldfish, while a Yin and Yang symbol plays a key role.

The Ancient Dragon slot machine has an unusually large set up, which allows for 100 win-lines. Land the feature and those winning opportunities are increased, as the wild suddenly becomes more numerous.

The moment you enter this Konami designed slot you’ll realise this is no normal game. When the reels stop you’ll find four symbols on each of reels one and five, while reels two, three and four each show five symbols. This unique set up allows for 100 win-lines, which will certainly appeal to anyone who would consider themselves an action junkie!

Aside from the wild and the scatter, the stone dragon is the most striking on the reels. This is stacked throughout the game and being the highest payer, you can expect some large wins with the dragon. Other high paying symbols on the reels include the tortoise who seems to be intently looking up at something (maybe the dragon) and a slightly less interested goldfish. A lotus flower and a blue fan complete the themed symbols.

The lower end of the pay scale is filled by the usual playing cards, in this case ranging through 9, 10, J, Q, K and A.

The golden dragon symbol looks the same as the stone dragon, except for the fact that this dragon is alive. This symbol acts as the wild and will substitute for any other symbol apart from the scatter. As well as being the wild, the golden dragon is also the highest paying symbol in the game.

The scatter symbol is represented by the eye-catching Yin and Yang symbols. You’ll enter the free spins round when you land three or more scatters. The minimum three scatters win you 5 free spins, four scatters are worth 12 free spins and the maximum five scatters wins you 25 free spins.

During your free spins the stone dragon undergoes a transformation. When it lands on the reels, it will transform into the golden dragon, meaning many more wilds on the reels. This makes those large multi-line wins more achievable, all the more exciting because of the 100 win-lines in play.

Land 3, 4 or 5 more scatters during the free spins and you’ll retrigger the feature, adding a further 5, 12 or 25 free spins to your existing total.

The unusual setup of the reels, being much larger than usual, means that the reels take up virtually all the real estate on the screen. However, look above and below the reels and you’ll find dark red/purple patterns, giving the game a classic feel.

The reels, in contrast, have a dark blue backing. Overall, the symbols have a relatively basic design in comparison to many slots today, possibly because of the many playing card symbols. The mix of symbols do add a nice splash of colour to the reels. The golden dragon symbol is the most impressive of all. Land a win with the dragon and it will come to life, moving its head from side to side and breathing fire. The win line indicators are either side of the reels – how Konami managed to squeeze in all 100 I’ll never know, but they did it!

Sound effects on the Ancient Dragon slot games are excellent. You have the usual sound of the reels, but land a dragon in the bonus feature and you’ll catch the distinctive sound of the stone breaking away to reveal the dragon.

Will the Ancient Dragon Slot Breathe Some Fire into Your Gaming Session?

With the unique oversized set up, Ancient Dragon is sure to appeal to those who like action. One hundred win-lines ensures regular wins and excitement at every spin. The game feature sees the excitement levels rise quickly, where wilds can literally be everywhere – this is where the big wins will come. Add in the excellent visuals when the dragon does it’s fiery work and the excellent sound and you’ve got a highly recommended slot.