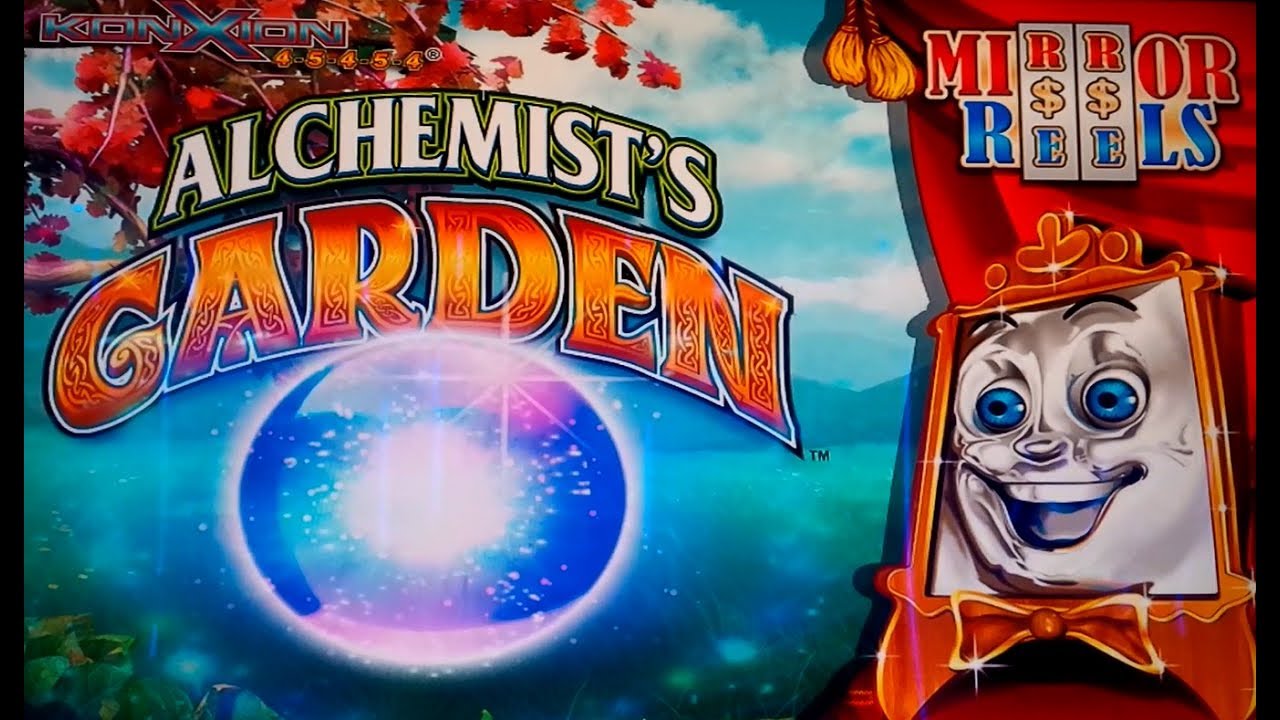 The ancient art of alchemy aimed to turn base metals into gold. Unfortunately, it was never successful, but a spin of Alchemist’s Garden might just be the closest you’ll come. The game is set in the garden of the alchemist, where he clearly enjoys practising his art. The alchemist himself features on the reels, along with a beautiful young lady who adorns the garden. Some of the tools of his trade also appear, including an egg timer, a test tube and a large pot which should produce the gold.

This game has an unusual set up, with the reels having a honeycomb look to them. Enter the free spins bonus round and you’ll find mirrored reels being the main feature, making those 5 in a row wins more likely.

The Strange Set Up and Base Game Wins

The reels in Alchemist’s Garden have an unusual 4-5-4-5-4 set up, with each symbol connected as they would be in honeycomb. Across these reels you have a total of 40 win-lines and these will come at the cost of the same 40 credits.

The mix of symbols is a good one. Of the standard symbols, the female character, who might be the daughter of the Alchemist, an assistant or simply visiting the garden, is the most striking. With red hair and electric blue make-up, you’ll struggle to take your eyes off the lady. The other standard symbols in the game are what the alchemist would use to create gold. The egg timer and the test tube are both made of a delightful gold and glass combination. The large golden pot and an ancient green and gold spell book also frequent the reels – this alchemist likes to work with quality equipment!

The lower paying symbols are made up of the playing card symbols 10, J, Q, K and A.

You might be disappointed to read that the wild symbol appears on reel three only, but this is no ordinary wild. First, you’ll find that it always has a 2x multiplier attached, doubling any win which uses it. However, occasionally, when winning with the wild, the middle reel will continue to spin. This will now increase the multiplier by 1 for every wild in its path and it can continue all the way up to an incredible 100x win. Nice work, even for an alchemist!

The Alchemist himself plays the role of the scatter symbol. Land 3, 4 or 5 scatters anywhere on the reels and you’ll be awarded with 10, 15 or 20 free spins.

When the free spins start you’ll find a Disney-like character mirror appear above the top of the reels. Each spin will now the see the right-hand side of the slot becoming a mirror image of the left -and side. The symbols on reel one will be the same as reel five, while the symbols on reel two will be the same as reel four. This can make those large five in a row wins much more likely, as you effectively only need to land the same symbol on reels 1, 2 and 3. With the wild on reel 3, it becomes even easier.

The feature can be retriggered too. Land a scatter on the left-hand side and it will repeated on the right, so retriggering can be a little easier too.

This Konami designed slot is set within the confines of the garden itself. Look above the reels and you’ll see barren trees and with gold and brown leaves, signifying the fall. Light beams down from the sky however, which signifies the magic that is taking place in the setting.

The reels are backed with a magical purple, while the symbols have an impressive, if not ground-breaking look. The game really comes to life when the bright wild illuminates reel three as the multiplier begins its journey upwards. Land the feature and the setting changes to a theatre, with a velvet red curtain – very much a magic show. The little mirror character above the reels does feel a little out of place, but is a nice addition – adding fun to the game.

Alchemist’s Garden is one of those slots which will certainly appeal to those who like their gaming unique. The 4-5-4-5-4 set up of the reels achieves this straight away in the base game. The increasing wild multipliers and the free spins feature are each fine additions to this Konami effort and ensure excitement levels remain high throughout. You may not create gold when playing this but you can certainly win some.