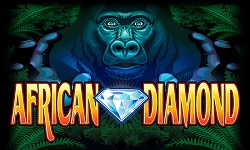 A Jungle Themed Slot with Stacked Symbols and a Bonus Multiplier

African Diamond is a slot for all those of you out there who like the idea of following in the footsteps of Indiana Jones, with adventure and riches on the horizon. The African Diamond is a large gem and sought after by many. However, the title graphic of this slot shows a large gorilla about to grab the diamond – so you’d better be quick. Joining the gorilla on this jungle themed slot are a variety of creatures, including a toucan and a butterfly.

This Konami designed slot features stacked symbols throughout, ensuring those big multi-line wins. The highlight of the game is the free spins bonus round, where each win receives a handy boost.

The African Diamond five-reel slot shows three symbols on each of the reels when the spinning stops. The game has a total of 30 win-lines, with the cost of each spin being the same 30 credits. The standard symbols in the game feature a nice mix of African wildlife, as well as a human character.

The gorilla looms large and is the most striking of all the symbols in the game. The image shows a close-up of the gorilla’s face and it doesn’t look very happy. Maybe it’s the fact that you’re trying to get your hands on its diamond! Whatever the reason, I wouldn’t get too close.

A toucan sitting on a branch also appears – its large orange beak making it one of the most distinctive birds on the planet. A blue butterfly completes the wildlife, while an African tribesman also features in the game. Wearing traditional African costume, this individual looks a little on the serious side, perhaps he is as protective of the diamond as the gorilla.

The lowest paying symbols in the African Diamond game are the playing cards 9, 10, J, Q, K and A.

A characteristic shared between most Konami slots is that a different symbol becomes ‘stacked’ on the reels every time you spin. This is chosen at random from the regular winning symbols. Stacked symbols give you a better chance of covering a lot of the reels with the same one. If you do so, or combine a lot of one symbol with some wilds – then a bigger win could be headed your way.

The diamond itself acts as that wild symbol. It’s a little more elusive than the other symbols as it only appears on reels 2, 3, 4 and 5. This wild will substitute for any other symbol in the game apart from the scatter.

The scatter symbol is represented by a map of Africa. Land 3, 4 or 5 scatters and you’ll enter the free spins round with 10, 15 or 25 spins respectively. Any time you land a win during these spins will see the win amount doubled, which is always good for a feature. The other good news is that the free spins can be retriggered. Land three or scatters during your spins and the appropriate number will be added to your remaining spins.

This Konami designed slot takes place within a clearing of the African jungle where you’re met by a lake. It’s a night time setting, and the rays of the moon illuminate the setting as they stream from the sky. Either side of the lake are rocks and trees, where you can be sure that the jungle animals are hid away.

The reels themselves have something of a basic look in comparison to many online slots today. They have a plain, pale backing, with the 30 win-line indicators framing either side. The symbols have the same basic feel, especially the six playing cards on the reels. However, the visuals receive a boost with the gorilla, who comes to life and thumps his chest when you land a win with this symbol.

The accompanying sound is simple but effective. Click spin and you’ll hear the whirring and clunking of the reels, while jingles greet each win. No, it’s not particularly African but it works.

Will a Spin on African Diamond Make You Feel Like King of the Jungle?

At first glance, the African Diamond slot machine might struggle to get the excitement levels going. The visuals aren’t the best you’ll find online and with a feature just like the base game, there can be a lack of variety. However, the Action Stacked Symbols format can offer up some real highlight moments. The 2x multiplier during the free spins can be big if you time it right too.