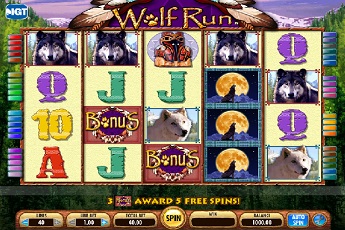 There has always been something slightly mysterious about wolves. These independent creatures have always been linked to the moon and the wild symbol shows a wolf howling at the moon. The link to the legendary werewolf only adds to the strange, dark feel of the wolf. The reels of this IGT designed slot feature three different wolf images, as well as two totem poles to add a Native American feel to the game.

With those stacked wilds throughout the base game, wins can be very regular, and potentially huge when those stacks line up. Enter the free spins bonus feature and the stacked wilds become more frequent, only adding to those big opportunities.

Like the majority of online slots today, Wolf Run plays out on five reels. Each of these reels shows four symbols when the spinning stops, and the game has a total of 40 win-lines. Players do have the option of playing 30, 20, 10, 5 or just a single win line too.

Of the standard symbols in the game, two wolf images are the highest paying. The first shows a dark-furred wolf with grey fur around its stern looking face – you wouldn’t want to face this wolf in the dark! The second is a friendlier looking white wolf, who you’d be much more inclined to approach (although I’m still not certain you should!). Each of the two wolf symbols pay 400 coins for landing the maximum five in a row on a win line.

Next on the pay table are a pair of totem pole symbols. The first wooden carving seems to show a bird with a long beak, while the second seems to show a human-like form holding a small blue creature. Each of these symbols pays 250 coins for the maximum five.

Howling at the Moon: Wild Symbols

The standout symbol in the base game is the wild, which shows the wolf howling at the moon. This wild appears on all five reels and is stacked throughout the game. As the wild, the howling wolf will substitute for any other symbol in the game apart from the bonus symbol. Being stacked, lining up those wild stacks can mean some fantastic winning opportunities. The dream scenario sees all five reels filled with this wild.

As well as being the wild, the howling wolf is also the highest paying symbol in the game. Line up 5 in a row on a win line and you’ll pick up 1,000 coins, the only four-figure pay out in the game.

The final symbol in the game shows a Native American dream catcher with the word ‘bonus’ in front. This bonus symbol appears on reels 2, 3 and 4 only. Hit the bonus symbol on each of these three reels and you’ll enter the free spins bonus round, as well as win an immediate pay of 2x your total bet.

You’ll start the bonus feature with five free spins. These spins play out on richer reels than in the base game, as those stacked wilds appear more often. The free spins can be retriggered too, with five additional spins added to your total when hitting the three bonus symbols again. A maximum of 255 spins can be won in the feature.

This IGT designed slot plays against the backdrop showing snow topped mountains in the background. In the foreground is a dense forest, where the wolves spend their time prowling. Smoke can be seen coming from the dense forest, perhaps from the Native American fires.

Each of the symbols is nicely designed and you’ll see a subtle change in each when you enter the free spins feature, as they face the opposite direction. The playing card symbols have been given a Native American makeover too, while also frayed by nature. The accompanying soundtrack is atmospheric, although a nod to the theme would have benefitted the slot more.

Should You Go on the Prowl to find the Wolf Run Slot?

Wolf Run is an enjoyable slot which is high on action from the start. The stacked wilds in the base game can make any spin a game changing one, especially when those stacks line up next to each other – look out for those four-figure wins too. The free spins feature is a nice addition to the game, where retriggers can come in very handy on those new, high paying reels.