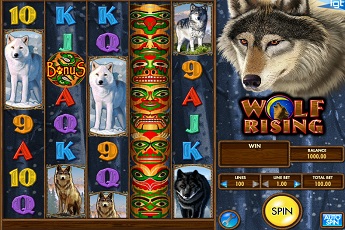 Wolf Rising is a slot with a difference. The game features four different types of wolves on the reels, all larger than your average symbol. The reels are on the larger side too, each reel containing room for eight symbols, making this one of the ‘tallest’ slots online.

Those tall reels are ideal for the totem pole symbol which can be stacked eight high, doubling up as the highest paying symbol in the game and the wild. Land the bonus symbols and you’ll activate the free spins bonus round, where the stacked wilds suddenly become a lot more prominent.

Upon entering Wolf Rising, the very first thing you’ll notice is the unique set up. Yes, the game has the usual five reels found at the majority of online slots today, but here each of the reels is eight symbols high. This allows for a game with 100 win-lines, which will certainly make for an all-action slot session.

If the whole 100 lines are too much, you can simply choose to lower it to 75, 50, 25, 8 or even just a single win line. You’ll choose a coin value and then multiply it by the number in lines play to give you your total stake for each spin.

There are four wolf symbols in play on the reels. A jet-black wolf and a pure white wolf share the same 500-coin pay out and each of these appears three symbols high. Land five of these wolves in a row and you’ll pick up a win of 500 coins.

Brown and grey/white wolves are next on the pay table and each of these appears two symbols high. The maximum prize for the pair is 250 coins.

Perhaps the standout symbol in the entire game is the Totem pole. This ornately carved wooden Totem is eight symbols high, so can fill an entire reel on occasions. The totem pole is wild, meaning it will substitute for any other symbol on the reels apart from the bonus symbol.

As well as being wild, the totem pole is also the highest paying symbol in the game, worth 1,000 coins for hitting the maximum five in a row. Being stacked, there can be occasions when the totem pole fills much of the reels, giving the potential for mega wins.

The final symbol in the game is the bonus, which shows a serpent etched into a round wooden disc. The bonus symbol appears on reels 2, 3 and 4 only and you’ll enter the bonus feature when it appears on all three.

You’ll now enjoy five free spins, as well as an instant win of 2x your total stake. During the spins, the reels have a richer set up, with more stacked wilds than in the base game. You can also retrigger the free spins at any time, which will see 5 more spins added to your existing total. This game allows for a maximum of 255 free spins.

During the base game of Wolf Rising you’ll be playing against a wintry background, with the brown furred wolf taking centre stage in the design. The scene changes completely to a starry sky when you look up the pay table. Check out the subtle changes in the symbols when you enter the free spins bonus round too – each will now face a different way, while the playing card symbols all now have a white edge. A highly atmospheric soundtrack gives the game the Native American feel throughout play.

Wolf Rising is a slot which will have great appeal to those who like their slot gaming a little unusual. The 5×8 reel set up is certainly different to your usual slot and with 100 win-lines, there is more excitement to be had with every spin. Throw in the high paying, two or three high, wolf symbols and the eight high Totem wild and there is action everywhere. Things get even better when you enter the free spins bonus round, where the wilds become even more frequent.