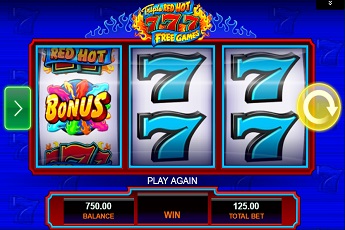 Seven has always been considered a special number. There are seven wonders of the world, seven colours of the rainbow, seven days in a week, seven deadly sins and you are said to be in ‘seventh heaven’. Roll a pair of dice and your most likely total will be seven top and it’s said that if you shuffle a deck of cards seven times, the order will be fully random. No wonder, that the number seven plays such a leading role in slot machines. In Triple Red Hot 777, the reels are literally filled sevens, apart from the wild and a single bonus symbol.

The ‘triple red hot seven’ symbol is the highest paying in the game and is there as a wild too, adding a nice multiplier into the mix. Land three bonus symbols on the reels and you’ll enter the free spins feature – a nice and unusual addition for a 3-reel slot. Look out for those spitfire multipliers!

Seventh Heaven – The Base Game

This IGT designed slot plays out on three reels. The game has a total of five win-lines, which are made up of three horizontals and a pair of diagonals.

As well as the red sevens, you’ll also find blue and white sevens in the game (I did tell you there were lots of sevens). The blue sevens pay 25 coins, while the white sevens are worth 20 coins.

The most impressive symbol in the base game is the ‘Triple Red Hot 3x’ symbol, which amazingly doesn’t feature a seven. Hit this symbol three times in a row and you’ll pick up an incredible 20,000-coin win – a huge prize for a 3-reel slot.

Not only is this the highest paying symbol, it also acts as the wild, substituting for any other symbol apart from the bonus. Any time you land a win with this wild, the win amount will be multiplied by three. Land a win with a pair of wilds and the multipliers will work together to give you an impressive 9x multiplier. For example, if you hit a symbol showing three sevens alongside two wilds, you’ll win 1,350 coins as opposed to the usual 150 coins.

Land any two wilds on a win line alongside a blank and you’ll pick up 10 coins, while just a single wild pays 5 coins (effectively giving you a free spin).

The free spins feature is activated when you land the bonus symbol anywhere on each of the three reels. You’ll now enjoy seven free spins to play with. Each of the free spins has the ‘Spitfire Multipliers’ added into the mix. Before every spin, a multiplier will be displayed which will be applied to any win. These multipliers range through 2x, 3x, 4x, 5x, 6x and 7x, ready to give any win a decent boost, especially when the larger of the numbers come into play.

The free spins can be retriggered too, with an additional seven spins added to your existing total when you land another three bonus symbols.

In some ways this IGT design has a classic feel. The game is played out on traditional white backed reels and sevens have played a leading role at slots for many decades now. However, you would never say this slot is dated – in fact it has a fresh appeal. All the symbols are very colourful, while fire surrounds many of the sevens. The blue background to the game shows the flames rising up from the reels. A high energy, modern soundtrack plays throughout the game.

While some three-reel slots could sometimes be described as basic in comparison to their five-reel cousins, Triple Red Hot 777 is here to light things up. With a 20,000-coin win only ever a spin away, every spin has that added excitement. The wild multipliers are there to boost any win, the boost real impressive when two wilds work together. Throw in the free spins feature with some oversized multipliers added into the mix and you’ve got a game that needs playing.