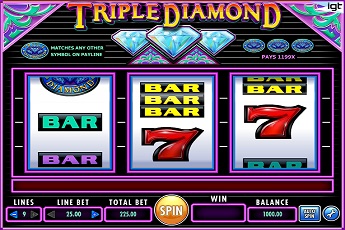 Triple Diamond is a perfect slot for those who want the classic slot experience. The game features both the traditional red seven and the bar symbols, with the bars coming in triple, double and single form. Line up three symbols in a row and you’ll win – the game couldn’t be any simpler. However, to add an element of excitement to the proceeding, the ‘triple diamond’ wilds are added into the mix.

Any win gained where the wild substitutes for a seven or a bar is given a huge boost, which only increases in size when a pair of wilds lead to a win. The biggest win in the game comes when you land three triple diamond symbols in a row, offering a juicy four figure pay out.

Classic Slot – The Base Game

This IGT designed slot features three reels. Across the three reels you’ll find a total of 9 win-lines, including all three horizontals as lines 1, 2 and 3. To land a win you’ll simply need to land three matching symbols in a row on one of those win lines. Players do have the option to play between 1 and 9 win-lines, an ideal option for those who like to see more spins for their cash. Having chosen the line bet value, this will be multiplied by the number of lines to set your total bet size.

Aside from the wild symbols, the red seven is the highest paying symbol in the game. Line up 3 in a row on any of the nine win-lines and you’ll pocket 100 coins. The bar symbols are next. Three triple bars in a row pay 40 coins, three double bars are worth 20 coins and three single bars pay 10 coins. As an added bonus, a combination of any three bar symbols on a win line pays out 5 coins.

If you manage to land three triple diamond symbols in a row on a win-line you’ll pick up a prize of 1,199 coins. Yes, this might be an unusual amount to win, but you certainly won’t be complaining as your bankroll receives this four-figure boost. With nine opportunities for this win on every spin, the excitement levels are high throughout.

The triple diamond symbol also acts as a wild, substituting for any other symbol in the game. Not only that, but every time you win using a wild symbol as a substitute, a 3x multiplier comes into play. For example, if you hit a pair of sevens and a wild on a win line, you’ll win 300 coins instead of the usual 100 coins.

That’s not quite the end of the story either. If you hit a pair of wilds with a blank, you’ll gain a 10 coins win. Even a single wild on a win line pays 2 coins – no it’s not enough to even cover the cost of the spin, but these small wins do add up in the long run, especially when they happen so regularly.

Triple Diamond is a perfect throwback to more traditional slots you might have played on the casino floor in any of the last fifty years. The game features white backed reels and the classic sevens and bar symbols. The game is a bit more colourful than in the past however, as the bars appear in green, purple and orange, as opposed to the black and white bars of old. The black background to the slot gives it a slicker, more modern feel too. The beeps and buzzes sounding throughout keep up the retro theme nicely.

Fans of three-reel slots will immediately take to this IGT design. The game isn’t complicated at all, simply line up three symbols in a row and you’re looking at a win. The retro feel of the game will appeal to all, but it’s the wins that add the excitement. Line up those three wilds in a row for the unusual 1,199 win, while look out for those wild multipliers, ready to give any win a huge boost.