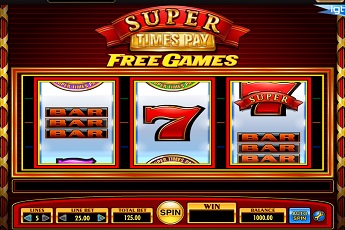 A Classic Three Reel Slot Where the Pays Accumulate Quickly

Super Times Pay is an online slot which plays out on the classic three reels. The game appears exactly as it would on the casino floor and features the traditional bars and sevens symbols. What sets the game apart are the wild multipliers which appear regularly on the reels. Golden coins appear with multipliers of 2x, 3x, 4x and 5x and are ready to boost any win, while the right combination of three wilds pays the Jackpot sized wins.

Unusually for a three-reel slot, you’ll also find a free spins bonus round in play too. During these spins, every win is given an added boost.

Wilds and Jackpot Pays – The Base Game

This IGT designed slot plays out on three reels and has a total of five win-lines. To win, you’ll simply need to land three matching symbols on a row on one of the lines. Win line one is the horizontal across the middle of the reels, while lines two and three are the upper and lower horizontals respectively. Win line four is the diagonal from top left to bottom right and line five is the mirror image of line four.

The position of the lines is important, as the biggest wins in the game vary based on the winning line. This biggest win comes when you land the 2x wild, 5x wild and another 2x wild on a win line. Hit this combination on line one and you’ll win 5,000 coins, while lines two, three and four pay 6,000, 7,000 and 8,000 coins. Land the big win on line five and the pay jumps to an impressive 10,000 coins.

Those wilds continue to offer wins at the lower end of the pay table. Land any two wilds on the same line (whether with the same multiplier or a different one) and you’ll win between 20 and 5 coins. Even a single wild on a win line pays too – the 5x, 4x, 3x and 2x wilds paying 5, 4, 3 or 2 coins for a single symbol.

A 3-Reel Slot with a Free Spins Bonus Round

Occasionally, the bar seven, the double bar and the red seven will appear on the reels featuring a ribbon with the word ‘Super’ written across it. Land three of these special symbols in any position and you’ll win yourself 10 free spins. Any wins in the feature are doubled (apart from the large jackpot wins, which now all pay 5,000 coins). The free spins can be retriggered at any time, with the game offering a maximum of 999 free spins.

Slot traditionalists will enjoy the look and feel of this IGT designed game. The reels contain the classic sevens and bar symbols and are housed on the retro style white, curved reels. The game even has that slight wobble when the reels come to a stop, giving it even more of an authentic feel.

With much colour and a vibrant design however, you wouldn’t say the slot is outdated in any way – more of a modern reboot of a classic look. The accompanying soundtrack will take you back to the early days of video gaming, perfectly fitting for the game.

If you’re of the opinion that three-reel slots can be a little mundane in comparison to their five-reel cousins, Super Times Pay could change your opinion. At any time, you could be looking at a huge win, especially when those wild symbols start to fill the reels. With a 10,000-coin max win, excitement is high throughout, while winning combinations are so plentiful that you’ll never have to wait too long for a pay-out. Land those ‘super’ ribbons too for free spins with an added multiplier.