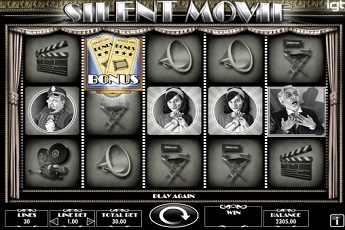 A Trip Back in Time to the Age of the Silent Movies, Featuring Four Free Spins Bonus Rounds

This IGT designed slot harks back to the early days of cinema, when a piano player in the theatre would play along to the action on the big screen. Stars such as Charlie Chaplin, Greta Garbo, Harold Lloyd, Buster Keaton and Douglas Fairbanks all made their name in this form of cinema, and this slot pays homage to the art.

On the reels you’ll find a variety of images relating to early cinema, such as a director’s chair, a vintage camera, a spool of film and a clapperboard, alongside movie imagery. The game features four distinct free spins bonus rounds, each activated by a pair of bonus symbols alongside the appropriate symbol on reel five.

The Base Game in Black and White

Silent Movie is a five-reel slot featuring three symbols on each of the reels when the spinning stops. The game features a total of 30 win-lines that pay from left to right, each symbol paying out for 3, 4 or 5 in a row.

The highest paying symbols in the game are the four movie images. A man with a shocked look on his face is the highest paying of all, worth 1,000 coins for the maximum five – the only four-figure pay out in the game. The character is Dr Jekyll, who is in the middle of a transformation with Mr Hyde. Next on the pay table is an image of a man in the moon, complete with a telescope so he can zoom in on the earth. This moon is full of craters and might well be made of cheese, the way it is melting. The moon pays 750 coins.

A young girl holds a flower, clearly an image from an early love story. Worth 400 coins for the maximum five in a row, this symbol is framed in a ray of sunlight. The final character symbol shows a keystone cop who will clearly make a mess of any potential crime investigation. The cop pays 300 coins. The movie paraphernalia symbols such as the camera and the clapperboard pay between 100 and 125 coins.

The silent movie title symbol acts as the wild and appears on reels 2, 3, 4 and 5 only. This will substitute for any other symbol in the game apart from the bonuses.

To enter any of the four free spins bonus features you’ll need to land two bonus cinema tickets alongside a bonus symbol relating to the four characters described above.

Dr Jekyll and Mr Hyde Free Spins – You’ll be awarded between 3 and 6 free spins. However, any non-winning spins won’t count towards your total, meaning you’re guaranteed a set number of wins.

A Trip to the Moon Free Spins – In this free spins round you’ll find an additional wild symbol added to reels 2, 3, 4 and 5 making wins that much easier.

A Muddy Romance Free Spins – This time around you’ll enjoy between 6 and 12 free spins. The female character will act as a scatter symbol during these spins, with prizes for three or more scatters appearing anywhere on the reels.

Keystone Cops Free Spins – In this feature you’ll have 10 free spins to enjoy. Multipliers of between 2x and 5x are applied to any wins and the size of the multiplier doubles after the first five spins.

The reels of Silent Movie are set within a cinema screen in the inside of a theatre. Throughout the game a piano plays, perfectly replicating the early cinema experience. The range of symbols will certainly appeal to fans of the era, each nicely designed in black and white, although the occasional splash of colour adds to the game nicely. Land any of the features and you’ll see a range of symbols relating to the relevant movie, adding variety to the game.

Will the Silent Movie Slot Give You Something to Shout About?

It can be tough to come up with an original idea for a slot, but IGT have certainly come up trumps here. The game perfectly represents the era, coming complete with four different movie themes which appear in the base game, while also hosting their own bonus feature. The free spins features all have their own distinct feel and with added wilds, scatters and even multipliers, you’ll soon have your own favourite. Silent Movie is a perfect slot for something a little different.