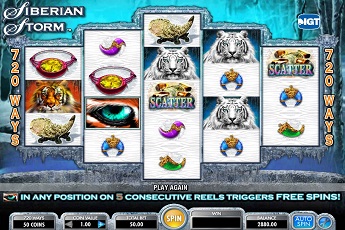 Siberia encompasses a vast expanse of Russia, with an array of wild animals inhabiting the land. Frozen in the winter, both Siberian and white tigers prowl the land and you’ll find both on the reels of this IGT designed slot. Joining the two tigers are a series of gold plated, coloured tiger claws, a yellow sapphire pendant and a close up of the eye of the tiger.

The game has an unusual diamond shaped set up allowing for the Multiways Xtra format. Wins come from both directions, while players will have hundreds of ways to win on every spin. Enter the free spins feature and an incredible 96 spins could be yours immediately, even without any retriggers.

The Siberian Expanse – The Base Game

Siberian Storm has a distinctive 3-4-5-4-3 reel set up which certainly grabs your attention. The diamond shaped reels pay from both left to right and from right to left and feature the all-ways winning system. Wins will therefore come when you land matching symbols on consecutive reels, regardless of the position on the reels. This amounts to an incredible 720 ways to win on each spin, which come at the cost of just 50 credits.

The title logo symbol is the highest paying in the game, worth 1,000 coins for hitting the title on all five reels. Next on the pay table come the two tigers, who each stare out from the reels with a fearsome look. The orange and black coloured Siberian tiger is the more familiar of the two and pays 400 coins when you line up five. The white tiger is the most distinctive symbol in the game, this much rarer creature paying 300 coins.

The lower end of the pay table features a series of gems and ornaments based on the region. These colourful symbols have top prizes ranging from 125 through to 50 coins.

Wild symbols in Siberian Storm feature a side-on image of the white tiger, with the word ‘wild’ written in orange in front of the image. This wild appears on reels 3, 4 and 5 only and will substitute for any other symbol apart from scatter and the bonus symbol.

The scatter symbol is unusual in that it doesn’t activate a feature, simply offering up a cash prize. 3, 4 or 5 scatters pay 2x, 10x or 50x your total bet size, making for a nice boost at any spin.

The eye of the tiger symbol is perhaps the most important in the game as it activates the free spins bonus feature. The feature is activated when the eye appears on all five reels, with 8 spins awarded for one bonus symbol on each reel. However, the feature can become a lot better, as you’ll have 8 spins for every combination of five symbols. For example, if you were to land two bonus symbols on reels one and two, with a single bonus symbol on reels 3, 4 and 5, you would activate the feature 4 times (2 x 2 x 1 x 1 x 1). This would give you an initial 32 free spins to play with. The maximum number of spins you can start with is an incredible 96.

The free spins can be retriggered too, with the feature only stopping when your spins run out, or you have reached the maximum number of 240 spins.

You can’t help but feel cold when you play this game, as icy stalactites hang down from the bottom of the reels, while the background scene shows Siberia in stunning blues and whites. The appearance of the tigers on the reels add a steely feel to the game – this is an area of the planet not designed for us humans. Look closely at the top of the reels and you’ll see an ice tiger formation either side. The unusual reel set up gives the game an original look, while the control panel below the reels is frozen too. An atmospheric, movie-like soundtrack adds to the overall experience.

This IGT designed slot has been a very popular one, ever since it first appeared in the casinos and online. The unique set up perks your interest immediately and the Multiway Xtra format makes for more exciting spins – especially when you receive that first ‘unexpected’ right to left win. The opportunity to win an incredible number of free spins adds further excitement, with retriggers possible too. It’s fearsome, frozen and fun.