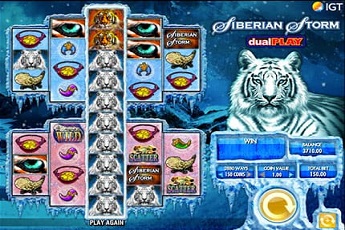 A Dual Reels Update of the Classic Siberian Storm Slot

Siberian Storm is a slot based around both the Siberian and the White tiger which roam the Russian expanse. The game has been so popular, that it was only a matter of time before there were spin-offs and the dual play version is one such offering. The original version of the game has a distinct diamond shaped set of reels and in this new game, a whole new reel set has been stacked on top. As well as the two standout tiger symbols, you’ll find a colourful array of Siberian gems, alongside a close up of the eye of the tiger.

The original game offered an incredible 720 ways to win on every spin, but that pales in comparison to this new version, the number increased to almost 3,000. The free spins feature goes that little bit further too, as you can start the feature with up to 160 free spins.

The usual reel set up of Siberian storm sees a diamond shape with 3, 4, 5, 4 and 3 symbols on each of the reels. The dual play version sees another reel set stacked on top of the original – think two diamonds balancing on top of each other and you have the general idea. The two reel sets are independent, apart from the middle reel – instead of two middle reels of 5 (as you might expect), the ten symbols are merged. This means that any symbol on the centre reel, whether at the top or the bottom of the reels, will count for a win on either of the dual reels.

The Multiway Xtra format ensures that you’ll win when landing symbols on consecutive reels, both from left to right and from right to left. The whole, unique set up gives you an amazing 2,880 ways to win on every spin, which come at the cost of just 150 credits.

The pay table shows you that the ‘Siberian Storm’ logo symbol is the highest paying symbol in the game, worth 500 coins if you land it on all five reels. The two tigers are next. The Siberian tiger, with its familiar orange and black colouring has a top pay of 200 coins. The distinctive white tiger pays 150 coins. Other symbols include Siberian gems and you’ll win between 60 and 25 coins if you land these on each of the reels.

The wild symbol shows a side view of the white tiger and makes an appearance on reels 2, 3 and 4 only. Being the wild, it will substitute for any other symbol apart from the scatter and the bonus symbol.

Scatter symbols are unusual in the fact that they don’t activate a feature, however the wins offered are the biggest in the game. Land 3, 4 or 5 scatters on the reels and you’ll win 150, 750 and 3,750 coins respectively.

The eye of the tiger is the free spins bonus symbol and you’ll enter the feature when you land the eye on each of the five reels. For every combination of five symbols you’ll win 8 spins. This can grow to an amazing 160 free spins if you manage to land more than one bonus symbol on some of the reels. The feature can be retriggered too, with the maximum amount of spins to be won a massive 480.

The Siberian landscape is a stunning one, especially in the winter. This game is set at night, with a brooding dark sky, while snow falls to the ground. To the right of the reels stands the white tiger in all its glory, it’s pale blue eyes staring out from the game. The unusual reel set up gives the game a distinctive look, made even more unique by the icicles hanging down from the reels. The atmospheric, movie-style soundtrack is the perfect accompaniment to the game.

Will You Trigger Wild Wins with Siberian Storm Dual Play?

The original Siberian storm has proved to be very popular and this new version of the game will surely become just as well liked. With an incredible 2,880 ways to win on every spin, excitement is guaranteed from the very start. That 10 high middle reel certainly makes a difference. With high pay scatter wins and wilds too, a big win is never more than a spin away. Enter the free spins feature and you could be looking at an amazing number of spins. What better reason to come face to face with a tiger?