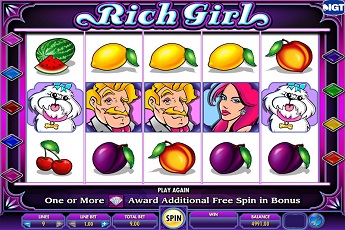 Live the High Life in this Diamond Encrusted Slot from IGT

She’s a Rich Girl is a slot based around a red headed female who clearly has a taste for the finer things in life. She is joined on the reels by a pair of cute pets in a dog and a cat, while an elderly man also appears on the reels. Whether he is a sugar daddy, or her actual father is open to question, but the frown on his face tells you that either way, he’s not overly pleased by her expensive tastes.

As well as some huge base game wins, players will enjoy scatter pays and a free spins bonus round. The free spins see the symbols all change to a variety of gems, while additional spins are easily added into the mix.

Expensive Tastes in the Base Game

This IGT designed slot features the very popular 5×3 reel configuration. The game features nine win-lines, so will certainly be enjoyed by those players who like to have more spins for their money. Players can play fewer lines than the default nine, with the chance to play any number between one and nine.

The standout symbol in the base game shows the title of the slot. This has a top prize of an incredible 10,000 coins when you land five in a row on a win line. The symbol is also the wild of the game and will substitute for any other apart from the scatter and the free spins bonus symbol. It gets even better as every time you land a win with a wild, the pay out amount is multiplied by two.

The red headed rich girl herself is next on the pay table and is worth 500 coins for the maximum five. This pay out is matched by the elderly man on the reels, who clearly has to keep up with the rich girl’s demands. The two pets are next on the pay table, each looking particularly cute, both with white fur and pink collars.

At the lower end of the pay table you will find a series of fruit symbols, which is a nice nod to classic slots. The melon, the peach, the plum, the lemon and the cherry each pay 100 coins for the maximum five in a row.

A scatter symbol shows orange, green and purple gems in a cluster. Land 3, 4 or 5 scatters anywhere on the reels and you’ll win 2x, 10x or 25x your total bet respectively. It’s unusual to have a scatter that simply pays a credit prize, offering up a nice cash boost to any session.

Diamond Symbols in the Bonus Round

The free spins bonus symbol shows a diamond and appears on reels 2, 3 and 4 only. Land the diamond on each of these reels and you’ll enter the feature. You’ll start the feature with 3 free spins, which might seem disappointing initially, but every time the bonus symbol appears during the spins, you have another spin added to your total. This means that you are almost guaranteed to enjoy way more than 3 spins – this game allows a maximum of 100 free spins.

During the free spins you’ll find a whole new set of symbols. The diamond is now the highest paying, worth the same 10,000 coins as the title symbol in the base game, and also acts as the wild. The other symbol during the feature are all gems, which each have a top prize of 50 coins.

She’s a Rich Girl has a distinctive purple and blue backdrop with a series of nine coloured gems indicating the win-lines. The reels have a white backing, which with the fruit symbols, adds a classic feel to the game. The character and the pet symbols are designed in a cartoon style, which adds a fun element to the game, while you’ll also enjoy some excellent animation on the reels. The upbeat soundtrack is added to by effective exclamations from the rich girl herself.

They say money makes the world go around and with some of the wins on offer in this IGT slot, the saying might be true. With 10,000 coin wins available in both the base game and the feature, excitement is high throughout. Those wild multipliers give the game a boost, while scatter wins are a nice extra. The game changes completely in the free spins feature, where you’ll hope to keep landing those diamonds to extend the feature.