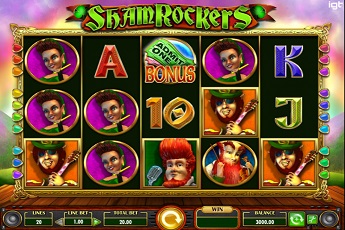 A Luck of the Irish Themed Slot with a Rock Twist

Head to any online casino and you’ll undoubtedly find a selection of games with an Irish theme. The games will usually feature four leafed clovers, pots of gold and pints of Guinness. This IGT designed slot takes a very different approach, basing the game around ‘The Shamrockers’, a four-piece Irish rock band. The four members of the band are all leprechauns and you have a lead singer, a guitarist, a drummer and a fiddle player.

The bonus feature of the game is a free spins round where one of the members of the band will take centre stage for each spin. Get lucky and you might land an ‘encore’, where you’ll get to play the spins all over again.

Shamrockers Eire to Rock is a five-reel slot with each of the reels showing three symbols when the reels stop spinning. The game pays from left to right and features a total of 20 win-lines, each indicated by colourful guitar picks either side of the reels.

The pay table shows you that the four members of the band are the highest paying symbols in the game. Leading the way is the lead singer (of course!). This character has enormous red hair with a quiff that rises way above his forehead, spreads all the way around the rest of his head, all the way down to a beard of a similar size to his quiff. In fact, if you were to turn the lead singer upside down, there probably wouldn’t be a noticeable difference. This fun character has a top prize of 500 coins.

The lead guitarist, who has lots of (slightly darker) hair too, wears a leprechaun’s hat and shades, all in an attempt to look a little ‘cooler’. Five guitarists on a win line pays 250 coins. The drummer is a female pixie, who has biggish hair on the top of her head – but is thankfully the only member of the band without facial hair. The drummer has a top prize of 100 coins. Finally, you have the fiddle player – the oldest member of the five. This leprechaun has no hair on his head but does have a long red beard, and the largest eyebrows you’ll ever encounter. The fiddle player pays 75 coins.

At the lower end of the pay table is filled with the playing cards 10, J, Q, K and A. The top pay outs for these playing cards range from 30 coins through to 20.

To enter the free spins bonus feature you’ll need to land the bonus symbol, showing a concert ticket, on each of the centre three reels. As well as an immediate win of 2x your total bet, you’ll also enjoy 4 free spins. For each of the four spins, a different member of the band will be stacked on all five reels. The fiddle player comes first, followed by the drummer and the guitarist, with the highest paying lead singer being stacked on the final spin. During the final spin, if you can land an ‘encore’ symbol on reel five, you’ll get to enjoy the four free spins over again.

The backdrop to this endearing Irish themed slot shows a wooden stage set up in the middle of the field. The viewpoint looks out from the stage to the rolling hills of the Irish countryside while the sky is a delightful mix of rainbow colours – will you find the pot of gold? Check out the animation when you land a win with any of the members of the band. As you might expect, the sound is excellent throughout, with some interesting rock ballad takes on traditional Irish songs.

IGT must be commended for taking the Irish theme and giving it a bit of a fun shake up by putting together a rock and roll band full of leprechauns. This isn’t a slot to be taken too seriously, just hit spin and enjoy. The free spins feature is an interesting one as you’ll enjoy the highest paying symbols being stacked every time, promising big pays.  The ability to retrigger the entire feature on the final spin is a nice touch too. This is the perfect slot for an enjoyable 10 minutes.