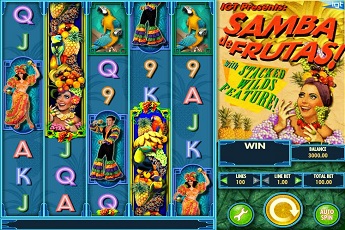 Samba de Frutas is the perfect slot for the Brazilian carnival experience. On the reels you have the colourful Queen and King of the carnival, as well as colourful birds – and what carnival would be complete without a pair of maracas. The game is an unusual one, as each of the five reels is an incredible eight high, with wild stacks that can fill a whole reel at once. Enjoy the Samba music while you play too.

Line up those maracas and you’ll enter the free spins bonus feature, where the reels are richer than the base game, promising some very nice wins.

Carnival Time in the Samba de Frutas Base Game

Like many online slots today, Samba de Frutas features five reels, although this is where the similarity to many other games stops. This IGT designed slot features eight symbols on each of the reels, making for a slot which is way taller than any other you might play. This gives you the opportunity of playing 100 win-lines, which is sure to add excitement to any session. If all 100 are too much for you, you can choose to play 75, 50, 25, 8 or even just a single win-line.

The highest paying standard symbols in the game are the Queen and King of the carnival. Each of these two symbols is three high and features the carnival goers in very colourful dress. Land five symbols in a row and you’ll win 500 coins for each. Next on the pay table are the toucans and the parrots, each of these symbols two high. The orange beaked toucan and the yellow feathered parrots each have a top prize of 250 coins.

The lower end of the pay table features the playing cards 9, 10, J, Q, K and A. The Ace and the King are each worth 150 coins, while all subsequent symbols each pay 100 coins.

The wild symbol is one of the most striking in online slot gaming. It features a carnival dancer with a huge ‘Carmen Miranda’ style headdress, with almost every fruit on the planet part of the outfit. The wild is eight symbols high, meaning it can fill one of these extended reels. The wild will substitute for any other symbol in the game except the bonus symbol. Land five wilds in a row and you’ll win the only four-figure pay in the game – exactly 1,000 coins. Being stacked, landing more than one wild reel during a spin can see many of the win lines pay at once.

Shake Your Maracas in the Free Spins Bonus Feature

The final symbol in the game is the bonus, represented by the maracas. This symbol appears on reels 2, 3 and only and will activate the feature when appearing on all three reels. You’ll immediately win 2x your total bet, as well as an award of five free spins. The stacked wilds in the free spins feature are richer than in the base game, giving many more winning opportunities. The free spins can be retriggered too, again and again if you’re lucky. The maximum award is 255 free spins.

Samba de Frutas has an unusual design as the reels fill the left-hand side of the slot, while the control panel is to the right. The reels have a blue background and if you look closely you can see the outlines of pineapples – there’s nothing more carnival than that. The symbols are high on colour, with both the Queen and King of the carnival standing out. However, no symbol stands out more than the wild, with that amazing headdress, featuring the amazing array of fruit. Check out the carnival music throughout, which will really get you in the party mood.

To the right of the screen you see an image of the lady with the headdress in a 1950’s movie poster style image – complete with more pineapples. The control panel sits below the image, with the useful auto spin option to the right.

Samba de Frutas is a fun, fresh and original slot. The moment you enter the game you’ll realise it’s a slot with a big difference – those enormous reels standing out. Any slot with 100 win-lines offers more excitement than usual, but add in the huge stacked wilds too, and any spin could offer a mega win. The free spins feature sees even more wilds added to the reels, with huge pays almost guaranteed.