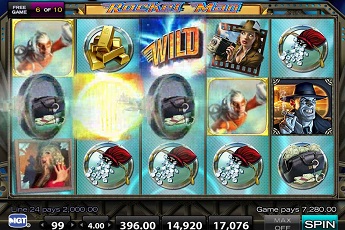 Rocket Man is a slot set in the US in the 1920’s, where Rocket Man has taken it upon himself to fight crime. His timing is good, because right now it looks like a bank heist is taking place, with gold bars, bags of cash and bags of diamonds on the reels. A mafia style gangster looks particularly pleased with himself in the back of a car, happily puffing on a large cigar. A shocked looking female bank teller and a photographer catching all the action also appear, perhaps hoping for Rocket Man to intervene.

This game features tumbling reels, which give the opportunity of landing win after win at the cost of just a single spin. The free spins bonus feature adds wilds to the reels, increasing the odds for those big wins.

Rocket Man plays out on the very popular 5×3 slot configuration. You’ll notice that instead of the reels spinning, the symbols simply fall on to the reels. This is due to the tumbling reels format. Every time you win, the winning symbols will disappear from the reels, with the symbols from above falling into their place, with new symbols appearing at the top of the slot. As well as your initial win, the reels will now be re-evaluated, with any new wins paid out. The reels will keep tumbling as long as the wins keep coming, so you might find yourself with a number of wins at just one spin.

The game has an impressive 99 win-lines, however if 99 credits per spin is too much, players can choose to play 50, 25, 10 or even just a single win line.

The rocket man is the highest paying symbol on the reels and pays an impressive 5,000 coins for the maximum five in a row. Next on the pay table is the brilliantly designed villain, who looks like he might have come straight out of the popular ‘Sin City’ movie. The dark haired female photographer has a top prize of 400 coins, while the distressed bank teller pays 300 coins.

At the lower end of the pay table is the booty from the bank raid. A black leather bag full of bank notes pays 100 coins, as does the pile of gold bullion. A red, velvet pouch of diamonds is the final standard symbol and pays 75 coins.

The wild symbol shows the word ‘wild’ in an impressive, early comic book style. The wild appears on reels 2, 3 and 4 only and will substitute for any other symbol in the game apart from the scatter.

A metal topped jar which can only be described as atomic, held by the rocket man acts as the scatter symbol. This symbol appears on reels 1, 2 and 3 only and lining up three in a row on a win line activates the free spins feature.

At first, you’ll be a little disappointed with the award of between just 1 and 4 free spins. However, every spin in the feature sees additional wilds added to the reels, making for some huge win opportunities with the tumbling reels.

IGT must be commended for the design of this engaging Super Hero slot. The four fantastically drawn characters in the game add a great depth to the slot. The bank teller tells you of the crime, while the satisfied villain in the back of the car tells you that he thinks he has gotten away with it. This is where the rocket man swoops in, all captured for the press by the photographer. Look out for impressive animation from the characters every time you land a win. The background to the reels shows an image of the blue sky with jet trails – this rocket man has been busy.

Rocket Man is a fun and engaging slot for anyone who likes their slot gaming a little retro. The engaging and impressive visuals will remind you of a comic book – with one of the best villains in slot gaming. The game play is excellent too. Tumbling reels will always make a base game more fun than usual – there’s nothing like seeing win after win coming in. The free spins feature, while quick, sees wilds added to the reels for a further boost. This IGT slot is certainly worth a spin or two.