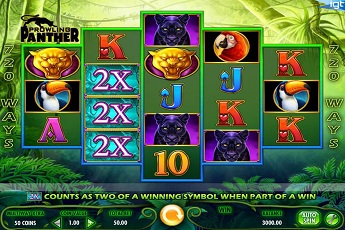 Prowling Panther is a five-reel slot based in the jungle, where the panther is clearly king. The panther stares out at you from the reels, with the combination of jet black fur and steely yellow eyes a fearsome one indeed. Joining the panther are a toucan and a parrot, which both add a nice splash of colour to the game, which is only added to by the playing card symbols.

This game features an unusual reel diamond shaped reel set and the Multiway Xtra format, promising a large number of winning opportunities on every spin. Look out for the golden panther too, for the opportunity of up to an incredible 96 free spins.

This IGT designed slot has a distinctive 3-4-5-4-3 reel set up, giving the reels the shape of a diamond. Instead of the usual win lines, here you’ll find the Multiway Xtra format in place. This format pays out when you land matching symbols on consecutive reels from left to right, regardless of the position on the reels. In total, this gives the player 720 ways to win on every spin, although you’ll only pay 50 credits for the privilege.

The standout symbol is the panther itself, which pays 500 coins when appearing on all five reels. The panther certainly has a mean look about it, but you’ll be happy to get to know him, as the 500 coins is the highest win in the game.

Next on the pay table is the toucan. This distinctive looking bird with its huge orange beak pays 250 coins. Adding to the colour is the red feathered parrot which offers a top prize of 175 coins. At the lower end of the pay table there are the playing cards 10, J, Q, K and A which pay between 80 and 50 coins as a top prize.

The wild symbol shows ‘2X’ set against a turquoise background. The wild will substitute for any other symbols apart from the bonus symbol and will acts as 2 winning symbols on any of the reels (effectively doubling your win). This wild only appears on reels 2, 3 and 4.

The final symbol on the reels is the golden panther, which acts as the bonus symbol. If anything, this symbol is more ferocious than the other panther in the game, as this one has its teeth on show, ready to attack its prey. To enter the free spins bonus round you’ll need to land this bonus symbol on all five reels.

You’ll gain an initial eight free spins, but this isn’t the end of the story. Like the other symbols in the game, the golden panther can be stacked too. If you manage to land it on all five reels, with more than instance on a reel, you’ll land more spins. For example, if you were to land two golden panthers on reels 1 and 2, and one golden panther on subsequent reels, you’d be considered to have activated the feature four times. This will give you 32 free spins! In fact, you can win up to 96 free spins initially. The free spins can be retriggered too, meaning the spins can go on and on. The free spins can go all the way up to an incredible 256 spins.

Prowling Panthers plays out against the backdrop of a jungle setting. The green of the jungle covers the whole scene, with even the brightness of the sky having a green tinge. As you move towards the ground, the foliage becomes thicker and darker, ideal territory for a panther to start on its prowl. Throughout the game, jungle drums play, adding nicely to the atmosphere of the slot, while the range of birds and playing cards on the reels add a nice amount of colour.

Will This Big Cat Slot Provide You Some Big Wins?

While there might be a number of slots with a similar jungle theme, Prowling Panther stands out for its originality. The unusual reel set up in combination with the Multiways Xtra format makes for an intriguing base game, where the wins can quickly stack up. Throw in the 2x multiplier for an instant boost too. The free spins bonus round is a must play, especially when you consider the incredible amount of spins that could be heading your way. IGT have come up with a jungle winner here.