Pixies of the Forest 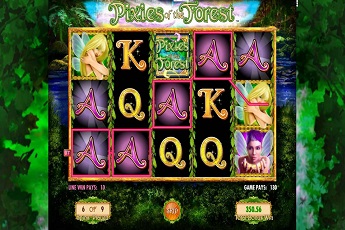 This IGT designed slot focuses on three Pixies throughout the game. First there is a purple haired Pixie who holds out her hands to the player, promising a gift. Then there is a brunette pixie who holds a finger to her lip – you might have seen her, but you’re not allowed to tell anyone. The final Pixie has blonde hair and is dressed in green, looking much like Tinkerbell from the Peter Pan stories.

Pixies of the Forest features the tumbling reels system, promising win after win at the cost of just one spin. With a large number of win lines, the tumbling symbols will be a regular occurrence. Enter the free spins feature for even more win opportunities than the base game.

Pixies of the Forest plays out on the very popular 5×3 reel configuration. This slot goes the extra mile however, as you’ll find an incredible 99 win-lines – many more than you’ll find at slots with much larger set ups. The good news is that you won’t have to pay 99 credits per spin either, the cost of each spin is just 33 credits.

The highest paying symbol in this game shows the slot title against a forest setting. Land five title symbols in a row and you’ll win 2,000 coins. Next on the pay table is the purple haired pixie with a top prize of 1,000 coins, while the brunette pixie pays 400 coins. The ‘Tinkerbell’ lookalike has a top pay out of 150 coins.

At the lower end of the pay table you’ll find the playing card symbols A, K and Q, which have top prizes of 40, 30 and 25 coins respectively.

The Wild symbol shows the word ‘wild’ against a green background. This will substitute for any other symbol in the game apart from the bonus and appears on reels 2, 3 and 4 only.

The game utilises the ‘Tumbling Reels’ format. This sees the symbols fall onto the reels when you hit spin, instead of the usual spinning motion. Any time you land a win, after being paid, the winning symbols will now disappear and the symbols from above will fall into their place, with new symbols appearing at the top. The reels will now be re-evaluated with any new wins paid out as well. This sequence will continue until there are no new wins to be had – offering the opportunity for a large number of wins at the cost of just one spin.

To enter the free spins feature you’ll need to land three ‘bonus’ symbols on a win line. The three bonus symbols will now transform into a ‘choose’ symbol. You’ll now have to pick one of the three ‘choose’ symbol which will reveal the number of free spins you have to play with. Like any good pick me round, you’ll also find out the numbers behind the two unchosen symbols. The free spins offer more winning opportunities than usual as the wild symbol now appears on reel one, as well as reels two, three and four. The reels are deemed to be ‘super rich’ in the feature, making for some very nice wins.

Pixies of the Forest plays out against the backdrop of a pleasant forest scene. The green and brown of the trees make for a colourful setting, while the sky is an explosion of rainbow colours, adding an air of mystery to the setting. Enter the free spins round and you’ll enjoy the new setting of a lake, which is just as picturesque. The design of the symbols is excellent too, especially the three pixies. The soundtrack has a magical feel throughout, while you’ll occasionally hear the pixies laughing, adding a fun feel to the game.

Will the Pixies of the Forest Conjure Up Wins for You?

IGT have designed an enjoyable and entertaining slot in Pixies of the Forest. The base game is more involving than usual, as you have 99 win-lines to enjoy, as well as the ‘Tumbling Reels’. Is there anything better than landing several wins for the price of one? The free spins feature is a good one too, where you’ll hope to be lucky and make the right pick. With ‘super rich’ reels, big wins will surely come your way. The eye catching design and the magical soundtrack only add to the overall enjoyment of this fantasy themed slot.