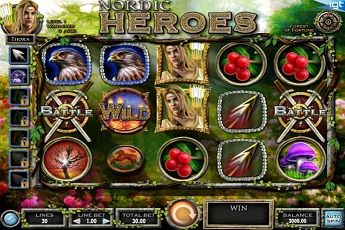 Head to any online casino and you’ll find a whole host of fantasy themed games, however this game goes much further than most. Your average game will see a series of symbols relating to the fantasy theme, but this IGT design sees your chosen character gain experience points and move up through levels. As the character in the game improves in experience, so do your winning chances.

The game starts with the character of Thora, a Nordic female whose weapon of choice is a bow and arrow. Reach level three of the game and you’ll have the opportunity of playing as Ragnar, who yields a Thor-like hammer. Along the way your character will move through eight levels, beginning as a wanderer and ending up as a champion.

Whichever realm you are playing in however, the reel set up remains as the popular 5×3 configuration, while the game has a total of 30 left-to-right paying win lines.

Taking the opening base game as an example, the highest paying symbol in the game is the wild. Land five wilds from left to right and you’ll win 1,500 coins. The wild will substitute for any other symbols in the game apart from the scatters.

The lead character, be it Thora or Ragnar, pays 1,000 coins and they are joined by symbols such as an arrow tip, a mighty hammer, an eagle, a wolf, berries, mushrooms and gold coins. Like any other aspect of the game, as you move through the levels and realms, other symbols will be unlocked, giving the game a whole new dimension.

After any spin you can enjoy the benefits of the mystery multiplier reel. This reel will give you one of a range of multipliers, ranging from 2x to 20x in the early levels of the game, to 2x to 30x if you reach levels 7 or 8.

The main feature of the game revolves around the battles you’ll fight. You’ll enter a battle for the first time when you land the battle symbol (showing a shield and two crossed swords) on reels 1, 3 and 5.

Having managed to defeat three monsters, you’ll now enjoy 1, 2, 5 or 10 Victory spins, the number based on the level, the character, the realm and the number of spins it took to defeat the final monster.

Every time you engage in a battle your character will earn experience points and these enable the characters to move up a level in the game. Moving up will unlock new characters, new equipment, new weapons, new realms and higher multiplier reels – the further you proceed into the game, the more expansive it becomes.

To talk about just one design in this game doesn’t do it justice, as the backdrop to the game changes, whether you’re playing against the forest backdrop or spinning on the raging seas. The cast of symbols change too throughout the game, while the high-quality level of the graphics never drops. The atmospheric, almost movie-like soundtrack, lends the game an almost haunting feel which grabs you throughout.

Nordic Heroes is game made for fantasy adventurers. If you want a fast-in, fast-out slot, this IGT design certainly isn’t for you. Nordic Heroes is a game which builds the longer you play it, as you win those battles, gain experience points and level up – the game offering new symbols, scenes and battles as you progress. The highlights of the game are certainly the battle rounds where you’ll strive to win and gain those ‘Victory Spins’, while the multiplier reel can give any spin a boost. For a slot with a story-line, this is hard to top.