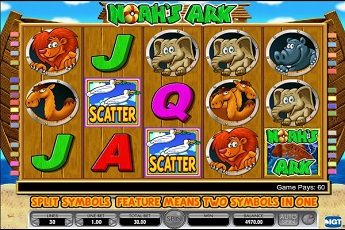 Noah’s Ark is one of the most famous narratives in the bible. Appearing in Genesis, God spares Noah and his family, plus the animals of the world from an all-engulfing flood, by instructing him to build an ark. The tale has been told many times over the years, featuring in books and movies, with the animals aboard the ark famously go in two by two.

Now IGT have designed an entertaining online slot based around the bible story. The game features a series of animals who might have been aboard the ark, each appearing either on their own, or with another animal of the same species within a symbol. The game has a fun cartoon-style feel, while a free spins bonus round is the main feature.

All Aboard the Base Game

Noah’s Ark plays out on the very popular 5×3 reel configuration. The game pays from left to right and has a total of 30 win-lines, with the cost of each spin being the same 30 credits. You’ll notice immediately that the animal symbols on the reels can appear as singles – as well as in pairs. This gives the pay table an interesting look, as you can therefore land ten in a row, despite there only being five reels.

The highest paying standard symbol in the game is the friendly looking lion, who like all of the other animals, appears through a wooden window of the boat. Land the maximum ten lions in a row and you’ll win an impressive 2,500 coins. The four remaining animals in the base game are a hippo, an elephant, a camel and a tortoise, who each offer a top prize of 1,000 coins.

The lower end of the pay table shows the playing card symbols A, K, Q and J. These only appear once in a symbol and the top prizes for 5 in a row are 200 coins for the Ace and 100 coins for the subsequent symbols.

The wild symbol shows the ark itself, with the title of the slot in large green lettering. This symbol will substitute for any other symbol in the game and when substituting for any of the animals will count as a double symbol. This wild is also the highest paying symbol in the entire game, worth an eye-catching 10,000 coins for the maximum 5 in a row.

The final symbol in the game is a dove with an olive branch in his beak. This acts as the bonus symbol and appears on reels 2, 3 and 4 only. Like the other animals, the dove can appear twice within a symbol, meaning a maximum of 6 doves can make an appearance. Land five or six doves on the reels and you’ll enter the free spins feature with 5 or 10 free spins respectively. Four doves will see you win 2x your total bet.

On entering the free spins you’ll encounter a whole new set of symbols. Leading the way on the pay table now is the giraffe, who is joined by a ram, a zebra, an ostrich and a crocodile (even the crocodile looks friendly in this game). Land 5 or 6 doves during the free spins and you’ll retrigger the feature.

If I was confined to a boat while the planet was engulfed in a catastrophic flood, I’m not sure I’d be too happy with it. However, the cartoon style animals in this slot seem delighted with their lot. This game has a fun and friendly design throughout, with colourful visuals and a cast of amiable animals. What does stand out in the design is the complete switch of symbols when you enter the free spins bonus round. This is a very nice touch and gives the bonus a whole new feel. An up-tempo soundtrack matches the fun feel of the game.

Will Wins Come Flooding in with the Noah’s Arc Slot?

While this slot might not set the world alight (well not with all that water around it won’t), it is entertaining and will place a smile on your face. The gameplay in the base game with the twin symbols give the slot a unique feel, while look out for that huge pay for the wild symbol. The free spins bonus round is a fun one, with a whole new cast of animals. No, this isn’t as big and bold as some online slots, however, it’s well worth a spin or two.