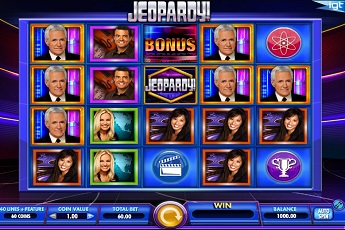 Jeopardy! is one of the longest running TV quiz shows. The show first aired in 1964 as a daytime show, a run which lasted for 11 years. In the next nine years only one more series was made until Sony picked up the show in 1984 and it has been running ever since. Alex Trebek has been the host of the show throughout that run and is joined on the reels by the ‘Clue Crew’ made up of Jimmy McGuire, Kelly Miyahara and Sarah Whitcomb Foss.

The game stands out for two reasons. First, there is a wild rush feature, where a single wild can see a number of other wilds make an appearance. Second, the free spins bonus feature starts with an intriguing pick me round, which sets up the spins perfectly.

This IGT designed slot plays out on a 5×4 reel configuration. However, this is no usual game as each and every symbol has its own individual reel, making for a total of 20 mini reels in the game. This is unusual and can lead to a possibility of having the same symbol fill all positions in the game, although that is still unlikely. The game features a total of 40 win-lines and the cost of each spin is 60 credits (20 credits are added for the feature).

The highest paying symbol in the game is for the host Alex Trebek, who pays 2,000 coins for landing the maximum five in a row. The three members of the Clue Crew each have a top prize of 800 coins, while the rest of the symbols are colourful icons from the show.

The wild symbol in the Jeopardy! slot is represented by the familiar Jeopardy title / logo. This wild only appears on columns 2, 3, 4 and 5 and will substitute for any other symbol in the game apart from the scatter. The wild has a ‘wild rush’ feature added. Any time a wild appears it increases the chances that the symbol below will also turn wild. Having landed a wild at the top of one of the columns, there is a good chance that every symbol below will turn wild in its turn.

Get a Daily Double in the Free Spins Bonus Feature

The free spins feature is activated by the ‘bonus’ symbol which appears on column 3 only. Land 2, 3 or 4 bonus symbols in the column and you’ll win 2x, 5x or 25x your total bet respectively, while also activating the free spins. This is where things become very interesting.

You’ll now enter a pick me round with 5 columns, and you’ll have picks from 3, 4 or 5 columns based on activating with 2, 3 or 4 bonus symbols. However, you can earn a ‘daily double’ bonus where you are randomly awarded another pick. Each column awards the following:

As you can see, each pick makes the feature round better and better, while activating the feature with more than 2 bonus symbols can be very important.

Jeopardy! has a modern slick design, with a background featuring studio lights all heading towards the centre of the action. The spinning of the reels is accompanied by a strangely satisfying clicking sound, which only stops when all 20 reels have stopped. The reels contain photographic images of the main players in the show, while the colourful icons sit against an effective blue background.

Will the Jeopardy! Slot Give You a Shot at the Limelight?

IGT have developed an engaging and entertaining game in Jeopardy! The base game, with 20 reels spinning is very different to most casino slots, while the wild rush feature can give any spin a boost. It’s the free spins feature that sets the game apart however. The pick me feature to start it off is original and offers potentially huge wins – the best-case scenario giving you an incredible 19 free spins with a 12x multiplier.