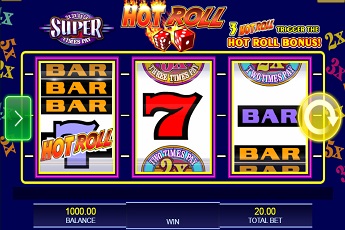 A Three Reel Slot Where Rolling the Dice is King

Hot Roll Super Times Pay is a slot available both online and one the casino floor. This game features three reels and the option to play up to 20 win-lines. On the reels are a combination of bars and seven symbols. These give the game a classic feel and are joined by a series of juicy wild multipliers. With 2x, 3x, 4x and 5x multipliers on the reels, any win can grow seriously big.

The bonus feature comes into play when you land a combination of three symbols showing the hot roll symbol. You’ll now get to roll some dice. Every roll offers up a credit win – all you have to do is to avoid rolling a seven.

Three Reel Fun in The Base Game

Most three-reel slots are quite limited in the number of win lines on offer. Usually you might find a maximum of five, with many games offering just a single win line. Hot Roll Super Times is different, as you can play as many as 20 win-lines for each spin. This means that this slot almost acts as an all-ways slot (the maximum number of combinations is 27, so most combinations are covered). If 20 lines are too many, players can also opt to play 15, 9, 5 or just a single win line.

Look out for those red sevens, which are the highest paying standard symbols in the game, worth 80 coins for three in a row. The bar seven symbol 40 coins and a combination of the two symbol featuring sevens is worth 20 coins.

The bar symbols come in the usual triple, double and single variety. The orange triple bar pays 30 coins, the red double bar is worth 20 coins and the blue single bar pays 10 coins. A combination of the three bar symbols is worth 5 coins.

As well as the large pays for the wilds, a series of smaller pays will help you on your way. Any time you land a combination of two wilds on a win line you’ll be paid between 20 and 5 coins, while even a single wild on the reels will pay a single coin for each multiplier (for example, a 4x multiplier pays 4 coins).

The bar seven symbol on reel one, the double bar on reel two and the seven symbol on reel three all display the ‘hot roll’ logo. Land three of these logos on the reels and you’ll enter the dice-based bonus game. You’ll roll two dice and win every time you avoid a seven. The pays are as follows:

This IGT designed slot will be enjoyed by players who enjoy the classic / retro feel to gaming. With bars and seven symbols on the reels this is a real nod to the past, while the white backed reels only add to the traditional feel. The design is not outdated however, as the colour scheme is vibrant throughout and the soundtrack has a nice energy, while still maintaining the retro feel.

Fans of three-reel slots will certainly be drawn to Hot Roll Super Times. With 20 win-lines, those wins are more frequent than ever before and with those added multipliers, watch them grow quickly. The max pay-out of 5,000 coins adds a nice level of excitement to any spin too. The bonus feature is the highlight – just avoid those sevens and the pays can be incredible.