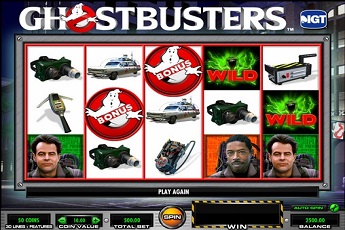 A Featured Filled Slot Based on the 1980’s Classic ‘Ghostbusters’

Ghostbusters famously hit the big screen in 1984, becoming one of the most popular films of the decade. The movie centred around the actions of the three Ghostbusters Peter Venkman (Bill Murray), Ray Stantz (Dan Aykroyd) and Egon Spengler (Harold Ramis). Also famously starring Sigourney Weaver and Rick Moranis, the movie would gross nearly $300 million at the Box Office. And who can forget the epic Ghostbusters theme performed by Ray Parker Junior – ‘I Ain’t Afraid of No Ghosts!’

This IGT designed slot features many of the leading characters on the reels (with the notable exception of Sigourney Weaver), as well as a series of ghosts who the Ghostbusters are trying to track down. The game features two entertaining main bonus features, while four further base game features can give any spin a boost.

Who You Gonna Call to Find Out How the Ghostbusters Slot Works?

This movie themed slot plays out on the very popular 5×3 reel configuration. The game plays from left to right and has a set number of 30 win-lines, while the cost of each spin is 50 credits (30 win-lines plus 20 additional credits for the features).

The base game features two wild symbols – the green ‘Slimer’ ghost and the elderly, slightly scary apparition of an old man. Each of these will substitute for any other symbols in the game part from the scatter and have the joint top prizes of 500 coins for the maximum five in a row.

The three main ghostbusters as well as compatriot Winston Zeddemore are the highest paying standard symbols, with Aykroyd’s and Zamis’s characters highest of all at 250 coins. Equipment used by the Ghostbusters also appears, such as the proton pack, the ecto goggles and the ghost trap also make an appearance.

Any spins which don’t trigger the main bonus features could see any of the following mystery bonuses added:

Multiplier – At any time a multiplier of between 2x and 5x can be added to any win.

Cash Award – You can benefit to an instant random cash award of between 50 and 1,000 coins – never to be sniffed at.

Wild Reels – At any time, between 1 and 3 reels can be turned completely wild, giving a huge boost to your winning chances.

Extra Wilds – Between 1 and 4 symbols will initially turned wild, while symbols adjoining the wilds can turn wild too.

Ghostbusters also offers entry into two distinctive main bonus features. Both of these are activated by landing the Ghostbusters symbol on reels 2 and 3, while ‘Slimer’ or ‘Stay Puft’ bonus symbols on reel 4 will activate this feature.

The Ballroom Buster Bonus, activated by Slimer, sees you enter a large ballroom, where you’ll have 5 proton shots, with the aim of finding one of the ghosts. Pick an object and fire and if a ghost is hiding in that spot you’ll win an award. The size of the award can be multiplied by between 2x and 5x too. The feature ends when you’ve fired all five shots.

The Stay Puft free spins feature sees a slightly different set of reels, as the wilds change to the Stay Puft character and toasting marshmallow. The game set up changes too as you’ll have 40 win-lines to play with, while flying marshmallows can add a series of wilds to the reels.

Ghostbusters has an energetic and fun design. On the reels you’ll find photographic images from the film, matched by cartoon style images. The best symbol on the reels is perhaps the Slimer wild, who jumps out from the reels, firing ectoplasm everywhere when you land a win. Land the bonus features and the visuals only improve, with new reels in the free spins feature and entertaining fun in the pick me bonus. The soundtrack is excellent, featuring the famous Ghostbusters theme, so turn it up loud and enjoy.

IGT have to be commended for taking the Ghostbusters theme and converting it into a highly entertaining online slot. While the base game at many slots is simply a precursor to the bonus action, here you can grab extra wilds, multipliers or even direct cash prizes. The two main bonus features are excellent too. The pick me feature in the ballroom is high on fun, while the free spins features offers up a whole new game. Ghostbusters is a slot you simply must play – just don’t get slimed!