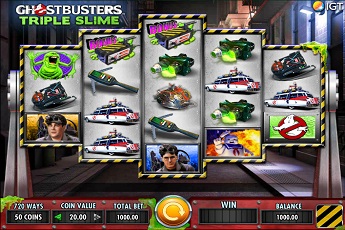 A Ghostbusters Themed Slot Where Bonus Wheels are King

Ghostbusters might be nearly three decades old, but it remains a firm family favourite today. The film is based around the adventures of the three Ghostbusters, famously played by Bill Murray, Dan Aykroyd and Harold Ramis. In the movie they aim to trap a series of ghosts, with the ‘Slimer’ perhaps the most notable and this is the ghost this IGT designed slot revolves around.

The game plays out on an unusual reel format allowing for the all-ways winning format. The first feature sees small wheel of fortune style bonus games played directly on the reels, while the second feature sees much larger wheels, with the potential of added multipliers.

Learn About the Base Game Before You Get Slimed!

Ghostbusters Triple Slime features an unusual 3-4-5-4-3 reel set up, giving the game a diamond shape. These reels offer the all-ways winning system, where you’ll win when landing matching symbols on consecutive reels, irrespective of the position. In total you’ll enjoy 720 ways to win on every spin, with the cost of each spin being just 50 credits.

The highest paying symbol in the game is the iconic Ghostbusters movie poster, although this symbol features green slime in the background. Land the poster symbol five times in a row and you’ll win an impressive 10,000 coins, while four and three in a row pay 5,000 and 2,000 coins respectively. These three prizes make for the biggest wins in the game – it’s certainly unusual for them all to come with one symbol.

The three ghostbusters are next on the pay table, with Murray’s, Aykroyd’s and Ramis’ characters paying 1,000, 400 and 300 coins respectively. Completing the pay table are a series of ghostbusting equipment symbols and the famous stretch ghostbusting ambulance conversion.

The Mr Puft Marshmallow Man acts as the wild. This will substitute for all symbols apart from the two scatters and the high paying title symbol of the game. This wild appears on reels 2, 3 and 4 only.

The first of the two bonus features is activated when you land ‘Slimer’ three times or more across any of the five reels. Each scatter symbol will turn into a small bonus wheel on the reels and you’ll spin each to win a prize. The values on the wheels increase as you move from left to right. As an example, the bonus wheel on reel one pays between 10x and 100x, while the bonus wheel on reel five pays between 100x and 2,000x. Landing scatters on all five reels is the best-case scenario, seeing you pick up the maximum five prizes.

To enter the bigger feature of the two you’ll need to land three or more ghost capture devices on the reels. The number of scatters used to activate the feature will now relate directly to the number of picks you’ll have to start the feature. Each pick will reveal a different coloured ‘Slimer’ which will activate one pointer on one of the three following bonus wheels:

Ghostbusters Triple Slime is set against the backdrop of a New York street scene at night – who knows what’s lurking in the shadows? The unusual reel set up gives the game a real distinctive look and an originality in the gameplay too. The standout symbol is certainly ‘Slimer’ who seems happy to leave his green residue anywhere he goes, and he is certainly the star of the two features too. Throughout the game you’ll also enjoy the famed Ghostbusters theme tune recorded by Ray Parker Jnr.

This IGT designed slot will certainly appeal to those players who like the thrill of the bonus wheel. With both main features centred around the wheel, you’ll feel that excitement every time the wheels slow, and those big numbers are near the pointers. The game as an excellent design too, while the original format gives you an incredible 720 ways to win too. If you don’t mind lots of slime, this is the slot for you.