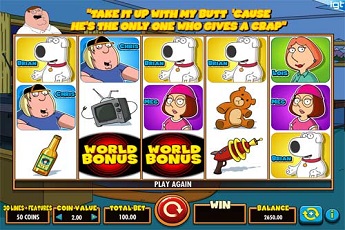 Family Guy first aired in 1999 and centres around the antics of the Griffin family, consisting of parents Peter and Lois, their children Meg, Chris and Stewie and dog Brian. The show nearly came to an end after three seasons in 2001, but such was the popularity of the re-runs and the incredible DVD sales, a fourth series was commissioned in 2005 and the show has been in production ever since.

This IGT designed slot takes many aspects of the hit cartoon series and turns them into entertaining bonus features. Enjoy Peter fighting with the chicken, Lois’s romantic free spins and antics in the Drunken clam.

Quahog Life – The Base Game

Family Guy plays out on the very popular 5×3 reel configuration and pays from left to right. The cost of each spin is 50 credits – 30 credits for the 30 win-lines, with an extra 20 credits added on for the host of features. Peter and Lois are the highest paying symbols in the base game worth 250 coins, while both Brian and Stewie pay 200 coins. Chris and Meg pay 150 and 125 coins respectively. The standard symbols are completed by a ray gun, a teddy, a floating TV and a bottle of beer.

During the base game you’ll find a series of randomly awarded features:

Peter’s Feature – Peter will appear and walk across the reels. At some stage he’ll bend over, and a large cloud of green gas will appear from his backside. While you might want to hold your nose, you’ll win a nice instant prize.

Stewie’s Feature – Stewie will appear and use his ray gun to turn up to three wild symbols on any of the reels. This will give any spin an instant boost.

Lois’s Feature – Lois will appear and select up to three members of the family, who will now appear above the reels. Any instances of any of these symbols will award an instant win, with the largest pay outs reserved for Peter (between 100 and 1,000 coins).

Brian’s Feature – Brian will make it easier to activate the ‘World Bonus’ feature (below), needing just one or two scatters to launch the main feature.

To activate the main feature of the game, you’ll need to land the ‘World Bonus’ symbol on reels 2, 3 and 4. You’ll now head to a screen showing Stewie spinning a globe, which will reveal one of the three following rounds:

Drunken Clam – Peter sits in the Drunken Clam surrounded by his buddies (Cleveland, Quagmire and Joe) and you’ll select one of the four to win an instant prize as they down their drinks. You’ll now select from a series of beer pumps and keep returning for more, winning instant prizes along the way. The four drinkers will eventually slump to the table, awarding multipliers as they go.

Chicken Fight – This feature starts with some great footage of one of the epic battles between Peter and the Chicken, before the pair enter a boxing ring. You’ll select one of the two ‘pugilists’ and hope your choice wins the video clip battle. You’ll receive more picks in this feature if your chosen fighter wins, with added multipliers. This is fun.

Lois Hot Spins – This free spins feature sees a new ‘romantic’ set of reels appear. When the stacked wild appears (showing a naked Peter with only the word ‘wild’ covering a certain section of his anatomy), love hearts will fill meters below the reels, turning some of the Lois symbols wild. By the end of the feature wilds will be everywhere, making for some huge winning spins.

The great thing about basing a slot on a cartoon TV series is that the imagery can perfectly replicate the series. That being the case, it’s just like watching an episode – apart from the fact that the characters spin around! The bonus features feature actual video clips and even some original imagery designed for the slot.

This IGT designed slot is sure to appeal to fans of the hit TV show, but the appeal will surely go much wider than that. The game is full of features throughout, making it high on variety with no two sessions ever being the same. The randomly bonus features in the base game will give your bankroll a boost as well as have you laughing. The ‘World Bonus’ feature only extends this, with bigger and better winning opportunities, while keeping the humour high. This is an excellent slot which must be played.