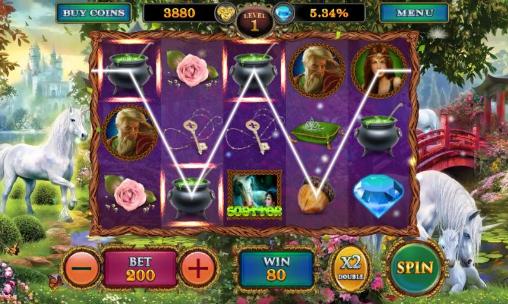 Enchanted Unicorn Slots is a fairly decent slot machine. If you are able to play long enough, you will start to see some of the 1,000 – 4,000 pay outs show up more often than in other slot machines. In fact this is one of the only slot machines that I have been considerably up in money after playing more than 15 minutes. Now that may be due o extremely good luck, but it is still a good slot machine.

The graphics are pretty decent as well. The slot machine is very dark so it is good for playing at night time. If you bet the max every single time in this game, it is almost definite that you will be losing all of your money in that session.

The bonus in this game can be a very good one, but there are no guarantees. Just like most other slot machines it is a game of luck. I have won 4,200 on the bonus and I have won 400. To get the bonus, a treasure chest must show up in the 1st reel and in the 5th reel. The game then takes you to a screen where you have to pick a block in a couple different levels. Each block has a winning value, a unicorn, or a joker. If you pick the unicorn, all of the points add up in that level and are yours, if you pick a joker, the bonus is over.

This game takes a little bit of patience. You don’t get up early in this one. If you get up at all it’s after a little bit of time after you’ve been able to have your chances at the bonus and other high winners.