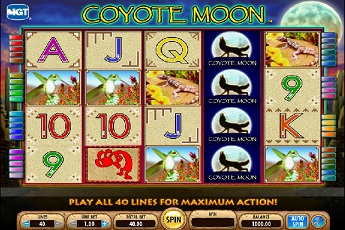 The only other slots I have played with this much howling in them have been themed around werewolves. Coyote Moon takes a classic wildlife theme, and the baying of the dogs can be heard in the distance while you spin. This is an older game, though the graphics are smart. The best visual effect is a huge full moon over a mountain scene, which appears between the main game and the free spins bonus.

Wilds (which show coyotes against a full moon) are stacked on every reel. These will often connect wins in several directions – giving you a lot of wins over the 40 win-lines. It is possible to cover the whole set of 5 reels with these symbols. That would generate a jackpot-sized win. There is a short free spins bonus game, which is triggered by getting special symbols on the middle 3 reels.

How the Reels Look Under a Full Moon

This slot uses the 5-reel and 4 row setup. You can see a detailed full moon poking up from the top right corner of these. There are 40 win-lines by default, though you can lower this number. With stacked wilds in play I recommend you stick with the full 40. This gives you the maximum number of directions in which those wilds can connect wins. Bets range from 1c per line and up.

Wild symbols are darker blue than the rest, and so stand out vividly on the reels. They also come in long strips – often covering entire reels (or 2 / 3 of the 4 symbols on it). These show a bright full moon with the Coyote mid-howl. When you win with these symbols, the howl sound effect kicks in.

These are the best paying symbols – as well as being wild. They substitute for everything except for the red stick-figure bonus symbols. You’ll get 1000 coins for 5 of a kind, 200 coins for 4 and 50 coins for just 3 of these wilds.

An elk, complete with impressive antlers, is the highest paying regular (non-wild) symbol. This is worth 400 coins for 5 of a kind. This prize is shared with a hummingbird, pictured mid-flight and about to sip from a flower. An iguana is the last living animal symbol. After that is the skull of a steer.

Playing card symbols have been given a native make-over, with aces down to nines in play on Coyote Moon.

I’m not sure if this animated bonus symbol is playing a wind instrument or smoking a pipe. Either way, it will trigger the free spins bonus game if you get 3 on reels 2, 3 and 4.

There are some cosmetic changes when this bonus game starts. A tribal sounding song starts, and the reels turn dark blue. You only get 5 free spins, though these can be retriggered. The stick man looks the same, only in green – and you need all 3 to extend the bonus game by 5 more spins.

Pay outs and stacked wilds are all the same as in the base game.

Around the reels you can see cacti and above them a vivid full moon. This works well with the playing card symbols, which have a Mexican style design around them, unique to each one. While the wildlife on the symbols shows a lot of detail, these are static designs. You get light effects crossing the symbols when they are involved in a win. The exception here is for big wins, where you see a bigger version of the red ‘stick man’ bonus symbol dancing above a ‘big win’ sign. The coyote wild symbols will also move – as if they are giving their best howl!

My favourite graphic is the huge full moon which appears before and after the free spins bonus. This looks stunning, and there are no reels to distract you when it appears. There is tribal music during the free spins bonus, though the ambient howling animal noises are what you are likely to remember.

Will the Coyote Moon Slot Drive You Wild?

This is a basic slot, which has the classic IGT focus on game-play. The main attraction are the stacked wilds. These can produce big wins out of the blue – and will give you a howl when they are part of any winning combination. There is only the single free spins game as a bonus feature. This is short, though retriggers are possible.