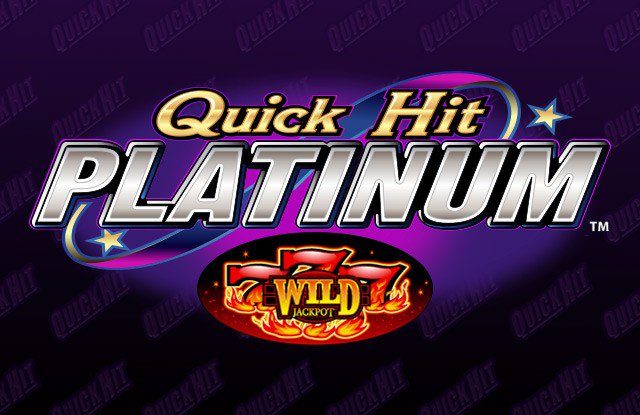 The ‘Quick Hit’ format appears in a range of games from Bally. In many ways, Quick Hit acts like a scatter symbol, where the more you land on the reels the more cash you’ll win. A standard scatter symbol might only appear on each reel once however, making for a maximum of 5 scatters. The Quick Hit format goes much further, as the symbol can be stacked on any of the reels, with pay outs all the way up to 9 symbols. Land the maximum number of symbols and the pay out is in jackpot territory – the Quick Hit living up to its name as it can be won in just one spin.

You’ll find a number of Bally games featuring the Quick Hit format, both in a live casino setting and online. Notable games include Quick Hit Las Vegas, Quick Hit Black Gold and Quick Hit Pro. Quick Hit Platinum is one of the most popular games using the format, and is available online as well as in live casinos. This guide will use that game as an example of the Quick Hits slot format.

Quick Hit Platinum is a five-reel slot with 30 win-lines that pays from left to right. On the reels you’ll find a range of classic symbols such as bells, sevens, bars and cherries.

Like many other games, the wild symbol plays a very important role. This will substitute for any other symbol in the game apart from the free games and quick hit symbols. The wild is also the highest paying symbol in the game, worth an impressive 2,500 coins for landing the maximum five in a row.

The blazing sevens are next on the pay table and these come in triple, double and single versions. The triple seven has a top prize of 1,000 coins, the double seven 500 coins and the single seven 200 coins. A combination of any of the seven symbols pays 100 coins, which matches the top prize for hitting the 5 bar symbol five times in a row. The standard bar symbol pays 50 coins and a combination of the two bar symbols pays 25 coins. The standard symbols in the game are completed by the bell and the cherry which both pay 25 coins.

There are two types of wins on offer using the Quick Hit format.

First, there is the standard ‘Quick Hit’ symbol. This can land up to nine times across any of the reels, but will start paying when you land just three. This minimum three will pay you 1x your total stake, but the amounts quickly rise. Land 7, 8 or 9 quick hit symbols and you’ll win 100x, 650x and 2000x your stake for each spin.

The other quick hit symbol in the game is ‘Quick Hit Platinum’. This acts more like a standard scatter as you can land a maximum of five – where it differs from the standard scatter is the size of the reward. Land 3 or 4 quick hit platinum symbols on the reels and you’ll win 2x and 25x your total stake. However, land the maximum five and you’ll pick up an incredible 5,000x your stake. This win converts to an incredible 150,000 coins!

Pick from Tiles to Reveal Your Free Spins Bonus Feature

Quick Hit Platinum slot machines gave a free spins feature which is activated by landing the bonus symbol on reels 2, 3 and 4. You’ll now be presented with a grid of 20 tiles. Each tile will reveal a number of spins and a multiplier. Match the same bonus round three times and you’ll enter the feature with your selection. While choosing the tiles, you can find a ‘wild’ tile, which awards five additional free spins. If you’re unlucky you might choose the worst-case bonus which is 5 free spins with a 2x multiplier, but choose correctly and you’ll find yourself with 20 free spins and a 3x multiplier.

This game, as well as the others in the Quick Hit range has a fresh, colourful and clean design. The range of classic symbols such as the bell and the bar will certainly appeal to slot traditionalists, although the gameplay is completely modern. With animation the reels and bonus features aplenty, there is a vibrancy about this Bally design which is appealing.

What Do We Think?

The Quick Hit range from Bally offers players a slightly different slot experience. Many free games today use tried and tested formulas, such as a single scatter offering the chance to enter a bonus feature. While these same bonus features appear in the quick hit range, you also have the added opportunity of the quick hit. With the big prizes on offer, they make a fantastic addition to any game.