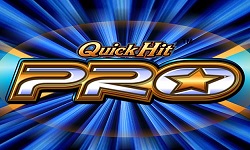 Quick Hit Pro is one of many Quick Hit themed slots produced by Bally, with games such as Quick Hit Black Gold and Quick Hit Las Vegas in the range. You might think that the ‘pro’ in the title stands for professional, but this isn’t the case at all. The word ‘pro’ refers to ‘Prochinko’, the pinball-like game where metal balls fall into slots after hitting pins on the way down. The ‘Prochinko’ game comes in at the end of the bonus feature and is based on the Pachinko games popular in Japan.

The main premise of the Quick Hit Games is the instant wins offered by the Quick Hit scatter. Land the maximum 10 scatters and you’ll win the top prize in the game!

The Base Game with Stacked Wilds

This Bally designed slot features five reels, each four symbols high when the reels stop spinning. The game has a total of 40 win lines and pays from left to right. Much of the rest of the Quick Hit range feature a series of traditional symbols and here you’ll find the bells and the cherries at the top of the pay table. Aside from these two ‘classics’ you’ll find the playing cards 9, 10, J, Q, K and A which are a feature of many slots.

The wild symbol makes the game more interesting than usual. Here the wild is stacked on the reels, four high at times, meaning it can fill an entire reel. Line up those stacked wilds and you could be looking at a mega win.

How the Quick Hits Work

The ‘Quick Hit’ symbols are like a scatter symbol with a difference. A ‘normal’ scatter symbol will usually appear a maximum of five times and will often be used to activate a feature. Here, the quick hit symbol can appear up to eleven times (or more) and simply offer an instant win (other quick hit games only give the chance for a maximum of nine symbols).

The prizes for the quick hits can vary from casino to casino. Some casinos will offer instant ‘set’ wins when landing three or more symbols across any of the reels – with a top prize of 1,500x your stake for the eleven (plus). Other casinos will link these slots in with a progressive jackpot, with the potential jackpots being paid rising the more symbols you land.

To activate the bonus feature you’ll need to land the free spins symbol on reels 2, 3 and 4. You’ll now be awarded a total of 15 free spins. You’ll quickly notice that an extra symbol has been added to the reels – a white ball. Every time this symbol appears anywhere on the reels, a ball will be added to a meter above the reels. The free spins feature plays out as usual, although slightly disappointingly, you cannot retrigger the feature. At the end of the 15 spins, you’ll now receive an added bonus.

You’ll find yourself enjoying a game of Prochinko, playing with the number of balls you were awarded during the spins. This game is a little like pinball, where you’ll use the touch screen technology to pull the lever back and fire the ball. Gravity will now see the ball take a downward journey, hitting pins on the way, until it settles into one of seven slots. The awards for each slot are 1x, 2x, 3x or 5x your total stake.

Quick Hit Pro has a slick black design that certainly gives the game added attitude. The colourful symbols provide a nice contrast to the black, while the wild symbol looks positively space-age. The over-sized cabinet in which the slot is housed is perfect, as you’ll need to look to enjoy the Prochinko experience. Having a game within a game is always a nice touch, and the visuals during the Prochinko feature are excellent.

Quick Hit Pro is most certainly a game with a difference. The base game features stacked wilds throughout, ensuring wins are that much easier to come by – making for a lower than usual variance game. The quick hit format is an interesting one, where big wins and Jackpots can be yours in a matter of seconds. Enter the free spins round and the game really goes into curveball territory. Where else will you enjoy Prochinko at the end of a free spins feature? This Bally produced slot is an original and entertaining one.