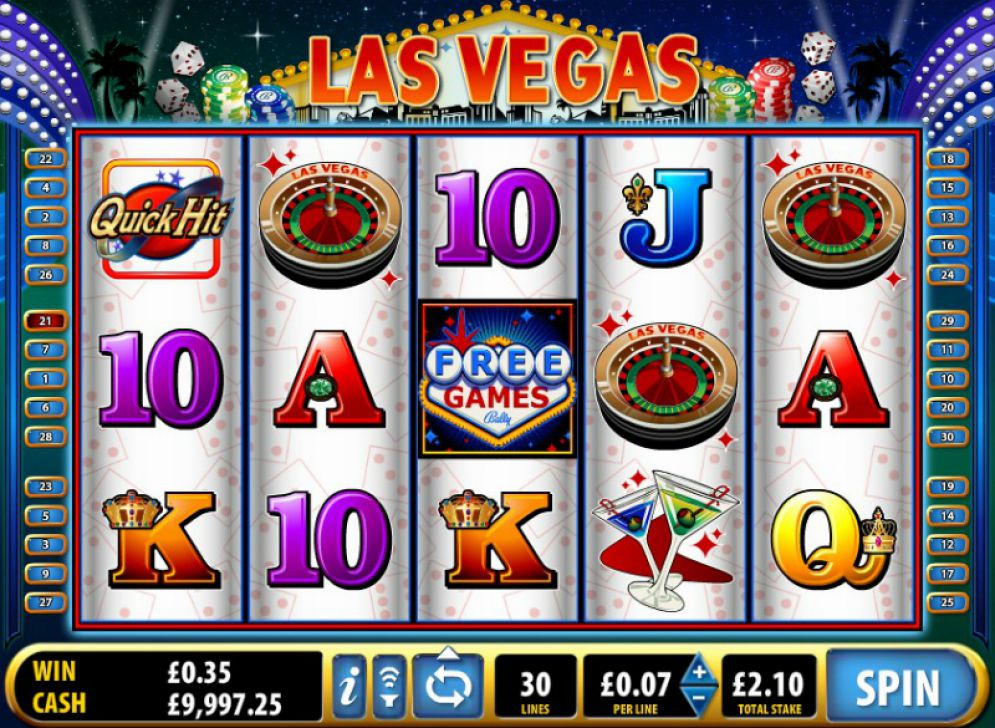 Quick Hit Las Vegas is another slot to the add to the popular Quick Hit range. Games such as Quick Hit Platinum and Quick Hit Black Gold have proven to be casino hits and there is no reason why this Vegas themed game shouldn’t be the same. The Quick hit premise is a simple one – land three or more Quick Hit symbols and you’ll gain an instant win. However, with up to 9 symbols available, this ‘quick’ win can be in the form of a huge progressive jackpot.

The other main feature of the game is a free spins bonus round, where you’ll learn the number of spins and the multiplier in an involving pick me bonus.

The Base Game – Vegas Style

If you’ve played any of the other Quick Hit games, you’ll know that they feature a series of retro symbol, including the classic cherry, the sevens and the bars. This version of the game takes a different approach, as you’ll find Las Vegas inspired symbols. What could be more Vegas than a roulette wheel, where the fate of a casino-goer’s bankroll could rest entirely on whether it lands on a red or a black. Las Vegas isn’t about just gambling however, and this is reflected by the two locked cocktail glasses. One of the cocktails is blue and the other green, each with an olive attached to a cocktail stick. The ‘Welcome to Las Vegas’ sign also features as the ‘free spins symbol’.

You can’t miss the wild symbol, as this shines brightly on the reels. The wild is stacked throughout the game and appears on all five reels. This wild is also the highest paying symbol in the game. Occasionally you’ll line up these stacked wilds and land one of those amazing mega wins.

The Quick Hit format is an original and entertaining one. Usually, a scatter symbol can appear once on each reel and will activate a bonus feature. The Quick Hit scatter symbol is different as it can appear a total of 9 times across the five reels. If you can hit three or more anywhere on the reels you are guaranteed a prize. However, if you land one of the bigger numbers you’ll be in line for a progressive jackpot. These jackpots start at 5 quick hit symbols, with the top, usually four-figure plus pay-out coming for the maximum nine. There’s no messing around with these quick hit wins – they’re fun and fast!

Picks Determine Which Free Spins Bonus Feature You Get

The free games feature symbol appears on reels 2, 3 and 4 only. Land the symbol on each of these reels and you’ll enter the feature. You’ll now be presented with a series of 20 tiles featuring the Vegas sign and palm trees at night. You’ll choose one tile at a time and each will reveal the number of spins, which will range between 7 and 25. Uncover the same number three times and that is your feature! You can also uncover a 2x multiplier too, which will be applied to all wins throughout the feature.

Quick Hit Las Vegas plays out on a large curved screen, showing the reels on the lower portion, and the Jackpot pays on the upper part. The base game, with the popular 5×3 setup, has a somewhat basic look, with white backed reels and the many playing card symbols. However, the look of the slot changes when you enter the free spins bonus round – the reels are now dark, with fluorescent dice in the background, giving the game an appealing, night-time look. Land a big win and watch those gold coins fly out from the screen.

This Bally designed slot is another fine Quick Hit game to add to the collection. With stacked wilds throughout the base game and the free spins, a huge win is only ever just a spin away. The free spins feature starts well with the exciting pick me feature, while added multipliers can give every win a nice boost. However, the real prizes can come with those Quick Hits. Land the maximum nine quick hits and you’ll be the talk of Las Vegas!