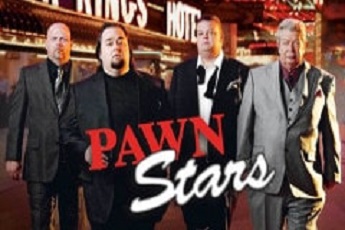 Pawn Stars is a reality TV show set in Las Vegas, Nevada, based around the world famous ‘Gold and Silver Pawn Shop’. The shop is owned and operated by the Harrison family, who would become the stars of the show. Launched in 2009, the show would become History’s number one series and continues to this day.

Usually, when a TV show becomes the subject of a slot, you’ll find video clips from the show in the game. However, Pawn Stars goes a little bit further. In this Bally slot, you’ll find specially filmed segments which you can only find on the slot – this tailored content really setting the game apart. Within the game are three distinct bonus features, adding some nice variety to the game.

It’s All About the Money – The Base Game

Pawn Stars runs on the Pro Wheel cabinet, which can hold 22-inch bonus screens, with a large mechanical bonus wheel at the top. The game itself plays out on the very popular 5×3 reel configuration and has a total of 25 win-lines.

On the reels, players will find four characters from the series in Richard ‘Old Man’ Harrison, Rick Harrison, Corey ‘Big Hoss’ Harrison and friend of the family, Austin ‘Chumlee’ Russell. The ‘History Channel’ logo on the reels also appears on the reels, with its eye-catching yellow colouring.

The wild symbol is represented by a pile of gold bars with the word ‘wild’, bold in red in the foreground. This wild will substitute for any other symbol in the game apart from the bonus symbol.

The first of the features is a randomly awarded one, where you’ll get to pick from many ‘pawn store’ style items. There are 20 items in all, including a piano, a bike, a diamond necklace and a cannon. You’ll simply choose one of the items and be awarded an immediate cash prize. Like any good pick em round, the game will also reveal the prizes awarded for all the other picks – you’ll now know if you made the right choice.

The other two bonus features are awarded on the mechanical bonus wheel at the top. To spin the wheel, you’ll need to land the bonus symbol on reels 1 and 5. On the wheel there are segments which will award you either bonus cash or free spins. However, two types of symbols will enter you into unique bonus features.

Chumlee Video Bonus – Having landed on this segment, you’ll be shown a video clip, where Chumlee will be dressed up in a variety of poses, including a leprechaun, an Egyptian or a cowboy. The character now offers you half of his cash. There is no interaction, but this is certainly a fun round.

Negotiation Feature – The best part of the game is the negotiation in the pawn shop, which is entered when you land on one of the five characters on the bonus wheel. You’ll now select an item and start to bargain with the characters. You might be offered a prize before an expert is called in – you can take the prize or wait for the expert. If the expert confirms its real, you’ll get double the prize, if it’s a fake you get nothing! In other deals you’ll get asked your price – go too high and they might say no, but if you go too low and you might not be getting a fair deal. How good are you at bargaining?

Over the Top Vegas Style Design

With the large mechanical wheel above the oversize screens, this live casino slot certainly looks impressive. The base game itself looks like any other slot on the casino floor, but it’s the features that set this game apart. The excellent video footage, with 100% original content, make for an involving and immersive game.

This Bally designed slot is one of the most original games on the casino floor. The wholly original content will ensure that any fans of the series will most certainly want to play, although the appeal will be much wider. The range of bonus features is excellent too, with pick me wins, video bonuses and free spins too. However, it’s the negotiation bonus feature which is a must play – can you get the better of the Pawn Stars? There’s only one way to find out – give it a spin!