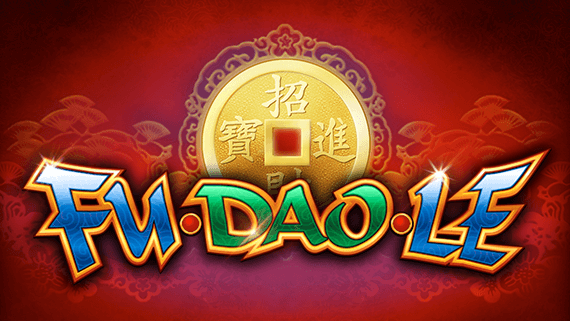 An Asian Slot with Mystery Symbols, Wilds and Jackpots

Head to any casino, whether live or online, and you’ll find a wide variety of games with a distinctly Asian theme. This popular theme offers many varieties of slot and Fu Dao Le slot offers a game with plenty of action. On the reels you’ll find a small child riding a fish, a golden fortune cookie, Chinese lanterns and a number of symbolic Asian themed symbols.

The games features expanding wilds, mystery stacked reels and a free spins bonus round. With five different jackpots to be won too, this slot is certainly high on variety.

Base Game with All Ways Wins & Mystery Stacked Reels

Fu Dao Le plays out on the very popular 5×3 reel configuration. The slot utilises the all-ways winning system. Instead of win lines, you’ll win when landing matching symbols on consecutive reels from left to right – the position of the symbols is not important.

Each spin will see ‘Mystery Stacked Symbols’ in play too. A number of stacked positions on each reel will appear with a gold patterned flower. This pattern will move aside and reveal a randomly chosen symbol from the game. All of the mystery stacked symbols in a particular spin will reveal the same symbol. This system will allow for those big multi-line wins. In theory you could land the same symbol across all five reels, which will pay the maximum 5 in a row win 243 times.

The standard symbols in the game are divided into two distinct groups. At the higher paying end there are the four themed symbols. The first of these shows the small child riding the goldfish. The child holds golden fortune cookies and looks pleased with himself. The golden fortune cookies also appear as a symbol by themselves and are joined by Chinese Lanterns and orange coloured fruits. Each of these symbols pays the same.

The playing card symbols 9, 10, J, Q, K and A make up the rest of the standard symbols, each paying the same smaller amount.

The wild symbol has a diamond shape with an Eastern inscription. This stacked wild will substitute for any other symbol in the game apart from the scatter. When partially appearing on reel 3 it will nudge up or down to fill the reel completely.

The ‘Wonus’ Symbol and Progressive Jackpots

The delightfully named ‘Wonus’ symbol is a cross between a wild and a bonus symbol. Like the wild, this will substitute for any other symbol in the game. However, land three across any of the reels and you’ll enter the free spins bonus round.

You’ll start with 8 free games, but there is much more to the bonus round than this. First, every time you land a ‘Wonus’ symbol on reel five you’ll gain an extra spin. These appear regularly and can make for some very extended features – you can even gain an immediate 3 extra spins when the Wonus symbol stacks on reel 5. The standard wild can also be replaced by 2x and 3x multipliers during the free spins too. This is always a decent boost and can make for some huge wins.

Red Envelope Jackpot – Above the reels you’ll see the ‘Red Envelope’ jackpot amount. This is a standalone win which is yours if you land the red envelope symbol on reels 1 and 5 during the same spin.

Jackpot Bonus Feature – A full clump of stacked wilds on reel 3 can see you enter this feature. You’ll be presented with a screen showing 15 gold coins. Pick them in turn and they will reveal mini, minor, major or maxi Jackpots. Whichever Jackpot you choose 3 times first will be yours.

Set against a rich, dark red backdrop, this Bally designed slot has a traditional feel to it. The mix of symbols are varied and add much colour to the reels, with the golden mystery symbols adding the feeling of riches. Check out the ornate designs on the reels too.  The appealing Far Eastern soundtrack to the game does a fine job of making you feel that you’ve been transported away to the region too.

Fu Dao Le is an appealing and entertaining slot. With the all-ways winning system and mystery stacked symbols in play, you can expect excitement with every spin. The energy of the game only increases when you land the free spins features with added multipliers and extended play too. Throw in five different jackpots and you’ve got a game that is high in variety throughout.