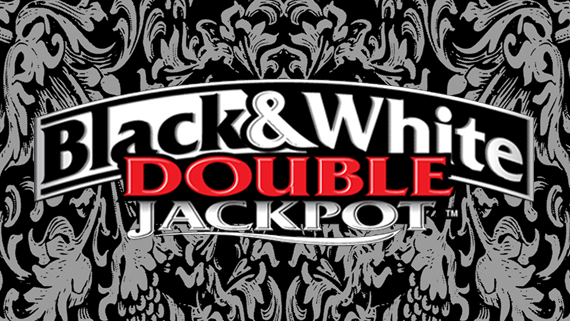 A Classic 3 Reel Slot with a Retro Feel

Slot machines have come a long way in recent years. Online games today featuring varied features, bonus wheels, free spins, video animation, surround sound and many other modern features. Sometimes, however, it’s nice to get back to basics. Double Jackpot Black and White slot machine does exactly that. This game only features a total of 6 symbols, the majority of these made up of the sevens and bars found in many traditional games.

The double jackpot symbol is the only original one and this plays the most important role in the game. Not only does it offer a jackpot prize, it also acts as the wild, enabling more wins with other symbols.

Three Reels and One Win Line

This live casino slot, which can also be played online, will remind you of classic slots which you might have seen on the casino floor at any time in the last 50 years. The black and white colouring gives the game a retro feel. In fact, some of the cabinets even feature the one-armed bandit style pull handle.

The Black and White 7’s game features three with just a single win line (there are variations on this at some casinos, with five lines across the three reels). A look at the large pay table above the reels shows that there are 3 levels of win for each symbol – when playing for 1, 2 or 3 coins.

The jackpot pay-out comes when you land three title symbols on the single win line. If playing for 1 coin, you’ll win 2,000 coins. If playing for 2 coins, the pay-out rises to 5,000 coins. Play for the maximum 3 coins and you’ll win an eye-catching 10,000 coins.  These pay-outs illustrate that playing for all 3 coins has the highest expectation, so this is certainly the way to go (all pay outs listed below will therefore assume 3 coins are being played).

Next on the pay table are three red sevens, which pay 1,000 coins for landing 3 in a row. Three black sevens pay 300 coins and three white sevens are worth 120 coins. A combination of the three sevens symbols also pays 120 coins.

Like many slots on the casino floor, you can also land blanks on the reels, which occurs when symbols land above and below the win line but not on it. Any spin which features no blanks will award you a 6-coin win.

There is little doubt that Bally have designed this game to appeal to classic slot enthusiasts. The black and white colouring gives off a vintage feel, with only the word ‘double’ in the title in red, to emphasise. With white, curved reels, this is as traditional as it gets. Around the title there is a paisley style design, which might have you thinking of a 1930’s style casino. The sound effects are a little more modern. Yes, you have the functional clicking and whirring of the reels, but land a win and an electronic style jingle greets you.

Double Jackpot Black and White slot machine is one of those slots which will divide opinion on the casino floor. Many players will walk straight past this machine and head to a more colourful cabinet, based on a movie or a TV show – a game with huge features and amazing graphics. However, for the sheer retro feel, this game has to be played – if only to get a feel for what slot gaming was like in the past. Let’s face it too, slots are about winning money and the 10,000-coin jackpot certainly has appeal.