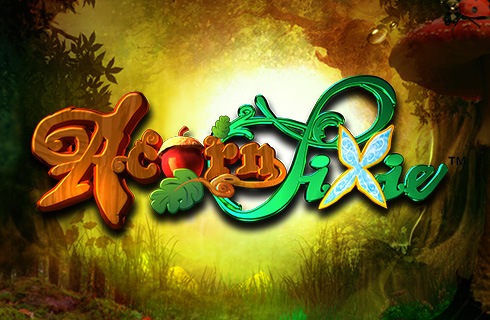 A Fantasy Themed Slot with a Unique Free Spins Feature

Acorn Pixie is a slot machine from Bally which takes you into a fantasy land. This land is inhabited by pixies and fairies, all living their lives in amongst the flowers and the creatures of the forest. On the reels you’ll find five different pixies, which are young female characters in a variety of poses. The game is certainly picturesque, made up of delightful pastel colours throughout.

During the base game you’ll enjoy the cluster wilds which can give any spin an instant boost. Land the free spins feature and you’ll enjoy a much larger reel setup, where you’ll uncover a picture and find wilds filling the screen.

The Acorn Pixie Base Game and Winning Pixies

Like many online slots today, Acorn Pixie plays out on the popular 5×3 reel setup. The game has 30 win lines and pays from left to right.

Aside from the wild and the scatter, the highest paying symbols in the game are four pixies. The first of these is the same image you’ll see either side of the reels, with a pixie gazing up into the sky. This symbol pays 500 coins for the maximum five in a row. A thoughtful looking pixie sitting on a leaf pays 350 coins, while a pixie playing a flute pays 250 coins. The final pixie, worth 125 coins, sits on a mushroom playfully, swinging her black and white stockinged legs.

At the lower end of the pay table you’ll find a number of plants and creatures. These include fireflies, ladybirds, mushrooms and flowers. A little pair of purple boots also appear on the reels.

The wild symbol shows an image of a pixie in green sitting by a window. This wild will substitute for any other symbol in the game apart from the scatter and the bonus symbol. This symbol is also the highest paying in the game, worth 1,000 coins for landing five in a row.

Occasionally you’ll be awarded with the clustered wild feature. This occurs randomly and will see a 2×2 block of wilds suddenly appear on the reels. This can give any spin a big boost and can lead to impressive pay outs.

The bonus symbol in the game shows a pixie standing at the foot of a flight of stairs. This symbol is easily identifiable as it is slightly larger than all the other symbols in the game. To enter the free spins feature you’ll need to land this symbol on reels 2, 3 and 4 (the only reels where this symbol will appear).

You’ll find yourself awarded with 7 free spins and enter a very different screen. The symbols are now laid out in a 5×6 configuration and you’ll quickly realise there is a picture hidden beneath. The first spin will see an acorn land on the middle symbol on the bottom reel, making the symbol disappear. This will reveal a small part of the picture. Each subsequent spin will see a cluster of other acorns appear around parts of the screen where the image is visible. As the free spins progress, more and more wilds will fill the screen, making large wins that much easier. This is an interesting and unique feature, which certainly sets Acorn Pixie apart.

At any time during the base game you can buy directly into the feature, with options to buy 6, 8 or 12 free games directly.

Acorn Pixie features one of the most artistic designs you’ll find online. On entering the game, you’ll notice that the reels are slightly smaller than usual. This makes way for large matching images of a fairy either side of the reels. This dark-haired fairy, lying on acorns gazes longingly into the sky, against the backdrop of trees and a hazy, yellow sky. The compact reels contain stylish symbols, whether one of the fairies or the variety of plant and animal life. The soundtrack is impressive too, with a magical feel in the base game, which becomes resounding throughout the feature.

Will Your Stake Grow into a Giant Oak?

The Acorn Pixie slot machine will appeal to those who enjoy a certain artistry in their play. This Bally design is delightful to look at throughout, both with the mix of symbols and the artwork in the bonus feature. The gameplay is original too. With clustered wilds in the base game, a big win is only ever a spin away. Land the expanded feature and you’ll enjoy possibly more wilds than in any other game you’ll play.