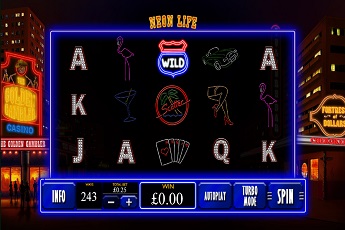 Neon Life is a slot centred around the Las Vegas Strip. Either side of the reels you’ll see the neon lights of the casino entrances, while the reels are filled with neon symbols. These symbols include playing cards, fast cars, stockinged legs of the show girls, pink flamingos and cocktails.

The game features the collapsing reels format. However, where other games using this format see the winning symbols all disappear, this game sees the losing symbols make an exit. Enter the free spins bonus game and you’ll enjoy the multipliers thrown into the mix too.

The Base Game and Winning Combinations

Neon Life is played on the very popular 5×3 reel configuration. Instead of your usual win lines, this game utilises the ‘All Ways’ winning system. Wins will come along when you land matching symbols on three or more consecutive reels from left to right – irrespective of the position on these reels. This system gives the player 243 ways to win and comes at the cost of just 25 credits per spin.

The five neon playing cards showing a Royal Flush acts as the highest paying symbol in the game, paying 100 coins for landing on all five reels. The stockinged legs and the green neon car each pay 50 coins, while the pink flamingo and the cocktail each have a top prize of 30 coins. The symbols are completed by diamond studded versions of A, K, Q and J, paying between 20 and 15 coins for the maximum five. The wild symbol, represented by a neon version of the ‘Welcome to Las Vegas’ symbol, will substitute for any other symbol on the reels apart from the scatter.

The final symbol in the game is the scatter which shows the image of a palm tree. When you initially land three or more scatters on the reels, these will light up and remain on the reels, while losing symbols will disappear. If you can make it to a total of 5 scatters or more, you’ll enter the free spins bonus round, winning up to 25 free spins.

During the free spins a ‘dynamic win multiplier’ column will appear to the left of the reels. Every second sequential collapse will see the win multiplier increase – starting at 1x and moving through 2x, 3x up to a maximum of 5x. If you make it to the 5x multiplier, you’ll have seen at least 7 sequential collapses, meaning the reels will be paying out a large amount anyway – with the 5x multiplier you’ll be looking at a mega win!

Neon Life has a slick, very modern design. The reels have a pitch-black background, ensuring the neon symbols illuminate the slot. The control panel below the reels is in electric blue, giving the slot an added buzz. The street scene in the background is purely Vegas, with neon lights, casino signs, high rise hotels and people milling around. The accompanying soundtrack is exactly what you might hear in a swanky casino, with a gentle piano jazz track playing.

If you’re a player who likes a slot with a difference, Neon Life might be ideal. There are a number of slots which use the collapsing reels format, but it’s rare to find one where the losing symbols are the ones to disappear. This gives each winning spin added excitement, as you hope to see those winning symbols build and build to give you that oversized win. With added multipliers in the free spins feature, the wins can become huge ones.