Batman and the Riddler Riches 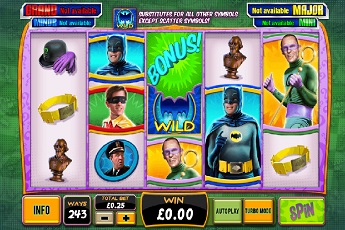 Batman and the Riddler Riches is a slot based upon the Batman TV series which aired originally in 1966. The show was nothing like the dark movies of recent years, with an air of comedy running through all the 120 episodes. This series did see the introduction for many to a number of Batman’s villains. In this Ash Gaming slot, the focus is on the Riddler, famously played by Frank Gorshin.

This game features the all-ways winning system and collapsing reels, leading to win after win during the same spin. Land three bonus symbols and you’ll head to the ‘Batman v Riddler Bonus Wheel’ where you’ll enjoy a variety of bonus games.

243 Ways to Win and Collapsing Reels

Batman and the Riddler Riches utilises the all-ways winning system on the five-reel setup. Instead of the usual win lines, you’ll win when landing symbols on consecutive reels from left to right, irrespective of the position. As well as this, the game also uses a ‘collapsing reels’ feature. Any time you land a win, the winning symbols will disappear and the symbols from above will now fall into their place. The reels will be re-evaluated in this second ‘wave’ and any further wins will pay out. This can continue into a third, fourth or even more waves, with all these wins are paid out for the cost of just the initial spin.

The Riddler is the highest paying symbol in the game and is worth 500 coins for the maximum five in a row. Batman and his trusty sidekick Robin are next on the pay table, worth 300 and 200 coins respectively. Police chief O’Hara, the Riddler’s hat and gloves, a yellow bat belt and the bronze bust which was pulled to set off the bat signal all also appear on the reels.

At any time during the game you might enter the ‘Mystery Spins’ feature. The Riddler will add a series of Mystery symbols to the reels, all of which will then transform into the same random symbol. This can lead to some huge wins, as the same symbol will dominate much of the reels.

Batman vs The Riddler Bonus Wheel

To enter the main feature of the game you’ll need to land the bonus symbol on reels 1, 2 and 3. You’ll now be presented with a bonus wheel (with the Riddler stood to the right) with three segments. When the arrow stops you’ll enter one of the three following bonus rounds:

Sticky Wilds Free Games – Sticky Wilds can appear on any spin and will remain in place up until wave three, making those successive collapsing wins that much easier.

Multiplier Free Games – After your initial win, any wins with successive waves will feature an ever-growing multiplier. Wins on wave two pay 2x, wins on wave 3 pay 3x and any further wins will pay 5x your usual win amount.

The Riddler Box Bonus – On the screen you’ll find 12 boxes. Open each box to reveal a cash prize. Match the same prize three times and the cash is yours.

After any spin you can have the opportunity to land one of four progressive Jackpots – the Grand, the Major, the Minor and the Mini. These jackpot opportunities are awarded randomly, although the higher you bet, the more chance you’ll have of landing it. The Jackpot features sees you pick from a number of icons – land the same colour icon (relating to one of the progressives) the appropriate number of times and the prize is yours.

Riddle Me This – Batman and the Riddler Riches Design

The backdrop to this super hero inspired slot features a green check pattern and look closely and you’ll see exclamations such as ‘Thwack!’ and ‘Krunch!’ from the TV show. All the imagery comes from the show, as does the soundtrack. This all comes together nicely when you land a win with the leading characters, as a video clip from the original series will play out.

Can You Solve the Puzzle of Batman and the Riddler Riches?

Batman and the Riddler Riches is an entertaining slot from the very start. With both the all-ways winning system and the collapsing reels in play, there is potential for huge wins during any spin, adding a buzz to the base game. The Mystery Spins feature can give you an instant cash boost, while any of the three games on the bonus reel makes for a fine feature. When you consider the progressive bonus wins too, this game covers every base.