Batman and the Joker Jewels 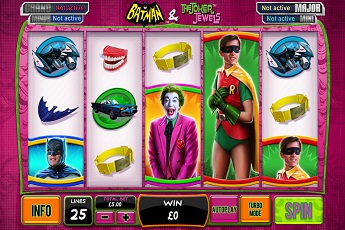 Ash Gaming have a series of excellent slots based on the original Batman TV series. Batman and the Joker Jewels features the caped crusader’s original nemesis – the Joker. There are clips from the series, fun quotes (‘Holy Ravioli’ is my favourite!) and retro TV sound effects like trumpet blares. Stacked symbols mean you get to see Batman, Robin and the Joker in full size, complete with original outfits.

This game lets you choose sides for the free spins bonus game. Special wild symbols let Batman and the Joker do battle – and you keep spinning until this is resolved. There is an on-reels feature where extra wilds can be added before you spin too. Finally, this game is part of a group of DC comics-based games that share randomly triggered progressive jackpots.

To the Bat-Cave: How This Slot is Set Up

In common with the other slots in this series, Ash Gaming have used the 5-reel, 3 rows standard for this game. The win-lines are not adjustable, with 25 in use. You can pick your coins size (from 25c per spin and up from this), choose the auto-play, and speed things up with the popular turbo-mode.

When you hit the spin button, jazz music plays. You’ll be hoping to line up the stacked character symbols when the reels stop. These can cover all 3 positions, making it possible to win from all 25 win-lines at the same time. Other winning symbols cover both sides. These include wind-up teeth, the bat-mobile and a gun which says ‘bang’ on a banner.

Wild Symbols Have the Biggest Prizes

Regular wilds have the bat logo on them, as well as the word ‘wild’. As well as completing wins with the other regular symbols, these logos have the biggest prize. This is 2500 coins for 5 of a kind. They pay all the way down to 2 from the left.

At random, the joker appears, laughing of course, from the sides of the game. This is a little shocking the first time! He will leave up to 9 ‘Smiling Wilds’ on the reels. These act the same as the logo ones – though do not appear on the reels in normal play.

There is one more type of wild. This appears in the bonus game – detailed below.

You really can’t miss the bonus symbols in this game. They are cartoon-like ‘Bonus’ with a jagged edge. When they land there is a sharp trumpet sound. You need to see these on reels 1, 3 and 5 to trigger the bonus game.

The reels then disappear. You see a screen where you get to pick whether to play as Batman or the Joker. I’m guessing most of you will go for the Joker here! You then see a quick video clip of your chosen character from the TV series.

When the game restarts, you see a meter above the reels. One character each side. The side you chose has one additional stop. In the middle is 1x, then 2x 3x and 5x – before the next stop is end. If you chose the Joker, he gets the 5x, with the ‘end’ for Batman coming right after the 3x. If you chose Batman, he gets the 5x instead.

You move backwards and forwards on this meter whenever a special wild appears on reel 3. This substitutes for other symbols, then flips over. It reveals an arrow, which moves the meter in that direction.

Free spins keep going until you get to the ‘end’ at one side. If you are lucky, you’ll get a series of wins with a multiplier before this happens.

Many of the design features have stayed true to the original 1960’s / 1970’s TV show. Compared to the modern movies, those costumes look very retro. Sound effects work well to complete the setting. The bonus trumpets bring back memories of fight scenes, where big punches had ‘pow’ signs.

Chattering teeth and a ‘bang’ sign gun make for original slot symbols. For me the Joker stands out the best of all.

Should You Take Batman and the Joker Jewels Seriously?

This is an entertaining game and fits well with the quality Batman range from Ash Gaming. Stacked symbols mean that big wins are possible from the get-go. It is the bonus feature which really helps this game to stand out. If you are lucky enough to get arrows moving you from left to right, then your free spins can keep going for a long time.