Batman and the Batgirl Bonanza 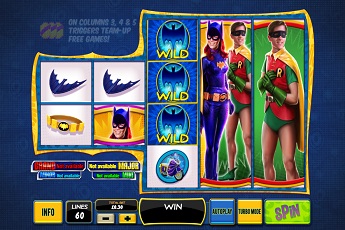 The Batman TV show ran from 1966 to 1968, encompassing 120 episodes. This series saw the introduction of many of Batman’s enemies, although these enemies (and Batman himself) are nowhere near as dark as the Dark Knight in the current movie franchise. As well as Batman and sidekick Robin, the Batgirl also featured regularly on the show and this Ash designed slot features all three.

Batman and Batgirl Bonanza plays out on an unusual reel configuration, with just a pair of symbols on the first two reels, before opening up on the right-hand side of the screen. The game offers up both re-spins and free spins, and look out for those co-op symbols, where two characters appear together. You can enjoy the opportunity to land one of four DC Comics linked progressive jackpots too.

The Base Game with Co-op Symbols

This Ash Gaming designed slot has a total of 60 win-lines. Unusually, the first two reels feature just two symbols on each, while reels 3, 4 and 5 each feature four symbols. This unique design places a large emphasis on the first two reels – land matching symbols on these and the opportunity for large multi win-line pays outs are yours.

The highest paying symbol in the game is the wild. This shows the famous bat symbol and will substitute for any other symbol apart from the scatter. Land the wild five times in a row and you’ll win an impressive 2,000 coins.

Aside from the wild, Batman, Batgirl and Robin are the highest paying at 400, 250 and 150 coins respectively. The three characters can work together in a series of co-op symbols, where two of the three both feature. These symbols can represent either of the two characters, giving you double the chance of winning.

Other symbols in the game include Alfred, batgirl’s motorbike, a walkie-talkie and the bronze bust pulled to activate the bat symbol.

Batman Team Up Free Games: This feature is activated by landing the cartoon style ‘bonus’ symbol, which appears exactly as ‘Kapow’ or ‘Thwack’ appeared on the screens in the TV series. The feature begins with a Super Hero Match Up game, which will reveal your number of spins – 12, 17 or 25! During the free games, reels 1 and 2 will merge to become one large 2×2 symbol for every spin.

DC Super Heroes Jackpot: You’ll also have the opportunity to land one of four progressive Jackpots too – Grand, Major, Minor or Mini. Entry to this feature is awarded randomly, although you’ll have more chance to land a jackpot the higher stake you play. You’ll be presented with a screen showing 20 icons set up in a honeycomb style grid. You’ll choose each icon in turn which will reveal a colour relating to each individual Jackpot. Land 5 reds to win the huge Grand jackpot, while just 2 greens will see you walk away with the mini Jackpot.

In many ways, the original TV series was as much of a comedy than it was about fighting crime, and this is well represented in the game. The full-size characters on the reels will show video clips when you win, showing this side of the show. The game is high on colour throughout and remains faithful to the show with the 1960’s slightly psychedelic soundtrack which greets your play too.

Batman and Batgirl Bonanza is an entertaining and distinctive slot. The unusual reel setup makes for a game with a difference, as you’ll be focusing on those first two reels, hoping for matching symbols. The opportunity is always there for some mega wins, aided by both the wilds and the co-op symbols. With both re-spins and a free spins feature, there is much to get your teeth into. The addition of four progressive jackpots too ensure that the excitement levels are high from start to finish. The best thing of all is that you don’t have to travel to Gotham City to play it!