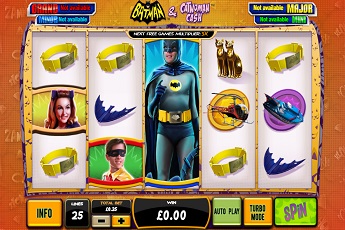 The Batman TV show originally aired in the 1960’s, although the popularity of repeats has seen a number of generations enjoy the series. Though not as dark as the movie franchise, the show introduced many to Batman’s villains and this particular slot focuses on the Catwoman. The feline character appears alongside Batman and Robin and a number of icons from the show on the reels.

Land a pair of special symbols in the base game and you can set up the bonus feature nicely. In the feature you’ll enjoy free spins and stacked symbols, while landing the bonus again is made that much easier. A series of four progressive jackpots can lead to a random big win too.

The Base Game and the Cat Burglar Bonus

Batman and Catwoman Cash plays out on the popular 5×3 reel configuration. The game pays from left to right and each spin comes at the cost of 25 credits. The pay table shows that Batman himself is the highest paying standard symbol, worth 400 coins for five in a row. The Catwoman is next, paying 200 coins and Robin follows closely behind, at 150 coins. Each of the three characters on the reels can be stacked, making those multi-win lines pays achievable.

The lower end of the pay table reveals a series of icons from the show. Leading the way are the Catwoman’s helicopter and speedboat, while her whip/mask combination, a pair of bronze cats, a yellow bat belt and the bat boomerang complete the standard symbols.

The wild features the famed bat symbol which lights up the Gotham night sky. This wild will substitute for any other symbol apart from the scatter. The bat symbol is also the highest paying in the game, worth an impressive 2,500 coins for landing the maximum five.

A cat burglar bonus comes into play when you land the bonus symbol on reels 1 and 3. The symbol shows the word ‘Bonus!’ much like the words ‘Thwack!’ and ‘Kapow!’ appeared in the original series. You’ll now be asked to pick one of the two scatters. One of the scatters will reveal an instant cash prize, while the other will increase a multiplier above the reels. This multiplier comes into play during the free games feature below.

To enter the free games feature you’ll need to land the bonus symbol on reels 1, 3 and 5. You’ll now get to make two picks from one of four Batman boxes and one of four Catwoman boxes. The Batman box will reveal your number of free spins, with a minimum of seven and a maximum of 25 awarded. The Catwoman box will reveal which symbol will be super stacked on the reels. You’ll want this symbol to be one at the higher end of the pay table, promising the largest wins. Throughout the free spins, the multiplier gained during the base game will be applied to all wins.

The free spins feature has an unusual feature. Directly after landing the feature, you have a 50% chance of landing it again sometime in the next 24 spins. This can give you an instant boost and adds a further level of excitement to the game.

There are four progressive bonuses on offer – the Grand, the Major, the Minor and the Mini. The Grand Jackpot is a potentially life changing one. When this game is randomly activated you’ll enter a pick me round, where each pick reveals a colour related to the four jackpots.

Fans of the original TV show will be taken with this Ash Gaming designed slot immediately. The game is full of colour and the imagery is taken straight from the TV series. Land a win with any of the three leading characters and you’ll see video footage from the 1960’s show, while the icons on the reels will be familiar to many. The psychedelic soundtrack from the show only adds to the game.

This Super Hero themed slot is an enjoyable one from start to finish. Having a smaller bonus feature in the base game that has an effect on the main feature is a nice, original feature. Build that multiplier up and the feature can be an amazing one. With super stacks and the potential for 25 free spins, the wins can and will quickly add up. Land the feature once and you’re more likely to land it again too! With progressive jackpots thrown into the mix too, this is a must play.