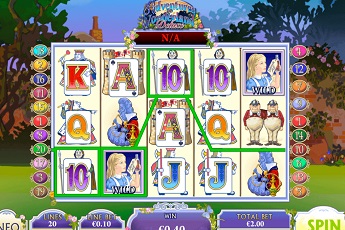 This is the older of two Ash Gaming slots which are based on the classic Alice in Wonderland stories. The story tells the unusual tale of Alice falling through a rabbit hole and landing in Wonderland, a strange and enchanting tale which continues to thrill today. This Ash Gaming designed slot remains faithful to many aspects of the story. It features characters such as the Mad Hatter, Tweedledum and Tweedle-dee, the Cheshire Cat and the Caterpillar.

The game is filled with bonus features. As well as a free spins bonus round with added wilds, you’ll also enjoy a pick me Tea Party Round, an instant win bonus feature on the reels and the chance to win a progressive Jackpot.

Wonderland and Wilds – The Base Game

Adventures in Wonderland is a five-reel slot featuring a total of 20 lines, with each spin costing a total of 20 credits. Alice herself plays the role of the wild symbol in the game. The wild appears on all five reels and will substitute for any other symbol apart from the bonus and scatters. Land 3, 4 or 5 wild symbols in a row and you’ll win 100, 1,000 and 10,000 coins respectively, the highest 5 figure win being by far the highest pay out in the game.

Tweedledum and Tweedle-dee are next on the pay table, offering a top prize of 1,500 coins, while the famed Cheshire Cat will win you 1,000 coins for lining up the maximum five. The blue-coloured Hookah-smoking caterpillar has a top pay out of 500 coins.

At the lower end of the pay table you’ll find the playing cards 10, J, Q, K and A. Each of these features an image behind it, the most distinctive of which is the angry looking Queen of Hearts behind the Queen.

Rabbit Hole Bonus Feature – This feature is activated when you simply land the rabbit hole scatter symbol on reel three. The reel will now change into a long dark rabbit hole which Alice will now fall. As she falls she’ll come across a variety of objects, each object awarding a prize. You’ll win between 7x and 20x your total stake in this feature.

Mad Hatter Scatter – This feature will activate when you land the Mad Hatter symbol three times or more across any of the reels. You’ll now enter the Tea Party Bonus Round. You’ll find yourself on a new screen showing a white-clothed table with Alice, the March Hare, the Mouse and the Mad Hatter all sitting in a line. You’ll now select one of the characters who will now be served tea. As the tea is poured, an instant win is displayed on the screen, which will continue to rise until the character has stopped drinking. In the middle of the screen is the ‘progressive jackpot’ sugar pot – if sugar is poured into a cup you’ll win the jackpot prize.

Free Spins Bonus Round – The white rabbit acts as another scatter symbol. Land three or more rabbits to enter the spins feature. The rabbit will now appear full size on the screen and look at his pocket watch. The hand of the watch will spin twice, and you’ll be awarded the total number of spins that the hand lands on. Then the rabbit will jump across the reels and turn between 3 and 5 symbols wild, which will remain as sticky wilds throughout the game.

The design of this novel inspired slot stays very faithful to the original imagery of the book. Each of the symbols is hand drawn and colourful and stands out on the plain white background of the reels. The backdrop to the entire game is Alice’s walled garden, with an impressive green lawn, with trees and flowers also featuring. The visual highlights of the game come in the bonus features – whether Alice is falling through the reels, you’re at the Tea Party or the white rabbit is awarding you those spins.

Off with Their Heads! Adventures in Wonderland Slot Overview

This Ash Gaming designed slot is perfect for those players who enjoy features that come thick and fast. With three different features and a progressive Jackpot opportunity, there is much to keep you entertained. The free spins feature with the sticky wilds might be the best of the three, while the chance to win the progressive jackpot in the Tea Party feature adds an extra level of excitement to this bonus. The short, sharp boost of the Rabbit Hole feature is sure to make a difference to your bankroll too. Adventures in Wonderland is an entertaining and highly playable slot.