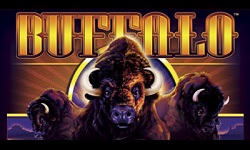 The Buffalo Slot game has long been a favorite of casinos in multiple countries— online and in-person, and playing it will show you why almost immediately. This fun and exciting online slot game will transport you to a casino in the old west, complete with the sounds of wild animals and simulated casino noises.

The Buffalo Slot comes in a few different variations, both online and in physical casinos, but the most common is the one found here— the Classic Buffalo game. Slot aficionados like this game because of the advantageous paylines, as well as the random, progressive jackpots. Here we’ll discuss some of the game’s history, how it’s played and the key features that make the Buffalo series of video slots a longstanding favorite.

The version of Buffalo now known as the “classic” version, was first released by the Australian gaming giant Aristocrat in 2008, and spread like wildfire across the US and the world.

Variations of the game, such as Buffalo Gold, Buffalo Stampede and more have given enthusiasts of the series fresh innovations of the concept, but many casino goers and home slot players can’t get enough of the cult-favorite, classic Buffalo game.

Enter any casino, and you’ll be bound to hear the familiar sounds of the Buffalo reels and the cry of “Buffalo!” signaling a big win at the slot.

The Basics of Buffalo

The Buffalo slot is a progressive video slot game with 5 reels and 4 horizontal rows. Unlike standard pay line slots, which tend to only have 243 ways to win, Buffalo has 1024, which may explain why it has become one of the most played slots in casinos across the world.

Other symbols that win the player bonuses when they land on the paylines include the bobcat, elk and wolf symbols and the face card symbols from 9 through Ace. 3 on a line wins the smallest, while 4 and 5 on a pay line win incrementally bigger, based on the size of the bet.

We touched on this a bit in the last section, but much of the reason why Buffalo is so well loved by casino goers and online players alike is its easy reached bonuses.

Like many video slots, Buffalo uses scatter symbols and wild symbols. Scatters are represented by shining gold coins, and 3 coins in a row yield the player up to 20 free spins. During the free games, wild tiles, represented by a sunset over 2 mountains in the desert, multiply wins by 2 or 3. In normal play, the wild symbols can become any other symbol in winning combination, which happens frequently, increasing the odds of smaller payouts.

One of the most attractive features of the Buffalo slot is the random, progressive jackpot feature. Players can randomly win big bonus jackpots, which is what makes these games so addictive.

Go to any casino, and you’ll see the Buffalo slots. Each day, thousands of people across the globe sit down at the addictive Buffalo series of games and tries to win big, but the game is also available both for free and to play with real money online.

We recommend that you start with the free version, to get yourself acquainted with the game, but once you get into it, you’ll kick yourself if you win a jackpot without being paid for it. So far, Buffalo has not been released as a mobile app, but fans of the slot remain hopeful.

The betting in the non-free version of the game is very casual. Players can bet as little as a single cent per reel (40 cents per spin), but the higher bets will pay out much more, and with a game with a win frequency as high as Buffalo, players often bet more than the minimum.

It’s no accident that Buffalo and its derivatives have enjoyed such popularity among slot machine fans, but young and old. It’s an entertaining slot game, available on multiple platforms and for free online, and with so many more ways to win than a standard 5 reel slot, we predict that it will be popular for many more years to come.